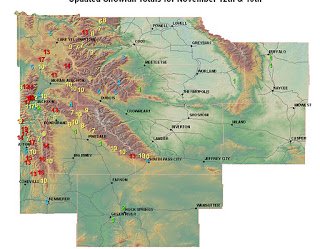 As shown on this graphic from WFO Riverton large amounts of snow fell across all of Star Valley from early Saturday morning until Sunday afternoon.  The greatest total observed was 19 inches at Star Valley Ranch followed by the 15 inches at the weather station just south of Smoot, 14 inches in Thayne and 12 inches in Alpine.

At the same location on the Ranch this picture was taken Sunday morning  where an additional 10 inches had fallen overnight! 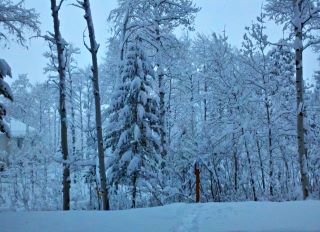 The pattern that has resulted in this sudden change over the weekend is still in place as can be seen on this evenings water vapor imagery.

A broad area of moisture extends from the  Gulf of Alaska southeastward across the Pacific Northwest and pointed toward western Wyoming.  What this implies is that while the snow has generally stopped across Star Valley Sunday evening, additional fast moving but somewhat weaker upper disturbances while continue the potential for periods of generally light snow into Tuesday.  Another 1 or 2 inches is possible but it appears that another bout of heavy snow seems unlikely.

By Wednesday high pressure will temporarily diminish or end any snowfall threat. It does appear that a major change in the large scale weather pattern will take place by the end of the work week increasing the potential for another significant storm affecting Star Valley/western Wyoming.

This is a model forecast depicting the development of a large scale upper level low pressure trough across much of the Western States.  Since it is still 5-6 days away, the reliability of these forecasts are somewhat limited but there is sufficient confidence to expect  the threat of winter weather conditions across much of the area from the Rockies westward including Star Valley.