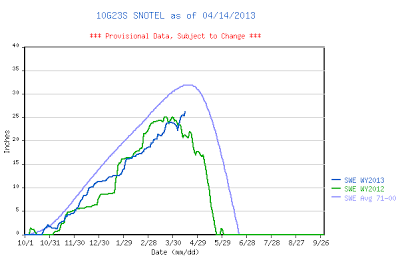 Significant storms have crossed Wyoming the past two weekends.  As a result there has been an improvement in the snowmelt runoff  prospects for the Star Valley region.  In addition, below normal temperatures, unlike in 2012, have slowed the melting process.  Following are graphs of SNOTEL sites as of Sunday April 14, 2013.

The Willow Creek reading have reversed since April 1st and now are above the levels as of the same time in 2012, and with a cold week ahead, should not show any significant melting for the next week or so.  While readings are still less than the 30 year average,  improvement has occurred.

While typically less than at Willow Creek, the Cottonwood SNOTEL  has also shown an improvement over 2012, though still below the normal.

At the top of Salt River Summit  this SNOTEL is about 1000 feet lower elevation than the previous two.  However the same trend is noted  in the past two weeks.  Still below normal but improved over 2012.

For the second year  the Sierras of California have a very poor snow season.  It could be a very thirsty year for California crops!

For our neighbors to the south it appears to be another well below normal runoff this Spring.  Brighton in the Wasatch above the Salt Lake Valley did have some improvement in the past two weeks, but still well below the 30 year normal.

The runoff is now over in the Arizona mountains as shown by the Baldy SNOTEL in the White Mountains.  It could be an early fire season in Arizona.

The Pacific Northwest has had a second year of above normal snow.  The Paradise Ranger Station SNOTEL located on the slopes of Mt Rainer has over 85 inches of snow water equivalent in their snowpack as of 4/14/13 and still climbing!