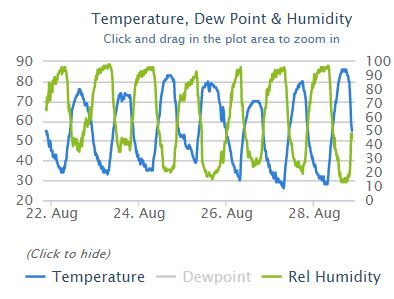 The very dry airmass, clear skies and calm nighttime winds have resulted in very favorable conditions  for large diurnal temperatures ranges across Western Wyoming the past several days.  Rises in temperatures from sunrise to peak afternoon heating in excess of 50 degrees have been common in the lower valley locations such as along the Salt River in Star Valley.

Today saw extreme ranges from frost at sunrise to mid summer like temperature by early afternoon  in some locations.  Following is a list of the more notable temperature ranges today.

Of  particular note was Peters Sink west of Bear Lake in Northern Utah where the morning low was 18 warming some 57 degrees to a high of 75 this afternoon.