Since the first week of January, snowfall has been very limited across Wyoming. With a wet December, above normal snow packs were reported much of the interior west around New Years.  However the SWE(snow water equivalent) has basically flat lined across much of the area due to the extended period of storm free days.  Following is the SWE for Wyoming as of February 6th with all areas now below 100% of  normal and dropping. 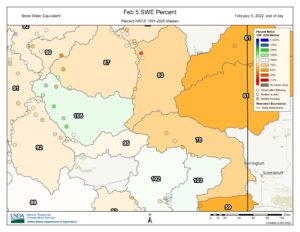 Of greater interest to Star Valley is the snow pack of the surrounding mountains.  The data from the Willow Creek SNOTEL site is a good source for evaluating the Salt River Range snow pack.  This automatic observation  has a record of 40 plus years.  Following is a map of it’s location along with the photo of the actual equipment. 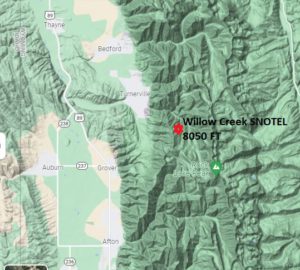 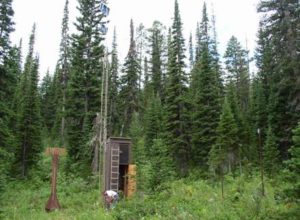 As can be noted on the SWE graph from the Willow Creek observation, there essentially has been no increase in the snowpack since the first week of January.

The black line represents this winter compared with normal(green) and the greatest(blue) and least(red) over the past 42 years.

Following graph indicates that while below normal, compared with the past 42 years, it has been much drier and wetter at this time of year. 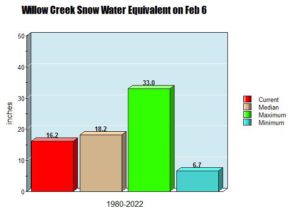 The current La Nina pattern is expected to maintain the dry regime over most of the west through mid February. In Wyoming the greatest chance of precipitation will be to the east of the continental divide.

Temperatures will also be mild typical of a La Nina.