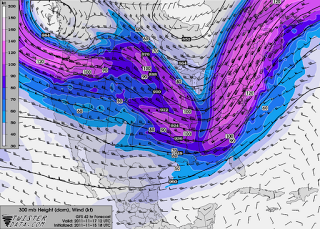 Wednesday will be another fairly quiet day weatherwise across Star Valley with still a chance of snow flurries similar to Tuesday.  Big changes will be underway by early Thursday. A disturbance will be moving across the Pacific Northwest Wednesday and spread increasing precipitation across Star Valley beginning by Thursday morning. The 300 MB forecasted  winds for Thursday morning show the strong jet stream heading toward Idaho and Western Wyoming.

Temperatures with this  system will remain near freezing in the valley, favorable for a rather wet snow. There could be several inches fall in the valley by Thursday night/Friday morning and higher amounts in the nearby mountains.

On Friday a very cold upper level trough of low pressure moves eastward from the Pacific Northwest states, which not only will continue periods of snow, possibly heavy in the mountains, but spread the coldest air yet this Fall across Star Valley.  The coldest air will arrive Friday night and by Saturday temperatures will remain in the low to mid 20s in the valley throughout the day.

By Saturday evening the strong jet stream and upper system will have moved rapidly on to the east of western Wyoming, leaving Star Valley under a very cold air mass which will end any significant snow threat.  Dependent on the amount of clearing that occurs, below zero temperatures are possible Sunday morning, at least in the typically coldest valley locations nearer the Salt River such as Auburn, Thayne and Etna.

Looking ahead to the first of the coming work week, it looks like high pressure will dominate with still cold nighttime temperatures, possibly below zero, and a slow climb in afternoon readings.  However there is potential for fog forming in the valley which would limit the heating potential in the afternoon.