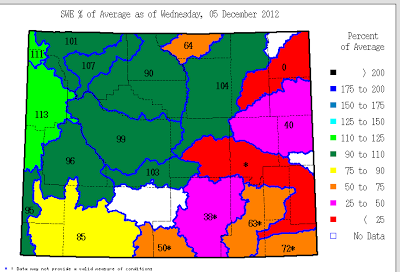 Star Valley residents have been somewhat surprised by the absence of snow over the first 5 days of December.  What snow fell Tuesday was gone by Wednesday morning as temperatures remained above freezing overnight, along with light rain.  However after such a dry summer, the new water year which began on Oct 1st has shown an encouraging beginning in Western Wyoming.  While the snow that has fallen in the valley keeps disappearing under recurring warm spells, the snow pack continues to build in the higher elevations.

The all important water equivalent of the current snow pack is generally above normal through December 5th in Western Wyoming.

The actual precipitation that has fallen since Oct 1st has been impressive with upwards of 15 inches in the high Tetons and even an estimated 5-10 inches in the higher terrain of Southeast Idaho and the Salt/Wyoming ranges east of Star Valley.

It is interesting to note the  http://www.cocorahs.org/ observsations from Lincoln County since Oct 1st.

The two stations(Smoot 4.9SE and Thayne 4.7 NE(Star Valley Ranch)) with a complete record since Oct 1st,  both have had around 5 inches of precipitation and from 2-3 feet of snow.  Thus snowfall is about normal, but temperatures have been unusually mild resulting in the melting.  An interesting comparison is for the 30 day period ending December 5th for this year and last year at the Thayne Elementary School weather station.

2011 had already experienced several below zero readings as early as mid-November. In 2012 it has only dipped to a little below 10 above zero a couple times and that was 3 weeks ago in mid-November.  It has not even dropped below 20 above in the past week, while on the morning of the 6th of Dec. 2011 it dropped to 14 below zero.  Such a difference.

So the question now is how much longer will we be seeing, still green lawns and golf fairways?  A couple charts would be best to answer that question.  The first chart is the 500 mb analysis Tuesday evening with still a trough off the west coast and a flat high pressure ridge over our region.  This is the pattern that has produced our moist/mild weather.

A strong northwesterly flow of much colder air will be spreading across all of the Northern/Central Rockies dropping temperatures well below freezing both day and night by the weekend.  Periods of snow will also occur much of the region, including Star Valley, beginning by Friday and continuing into next week.

The latest long range outlook through next week indicates both colder and wetter than normal which should be quite beneficial for continuing to build the mountain snow packs. 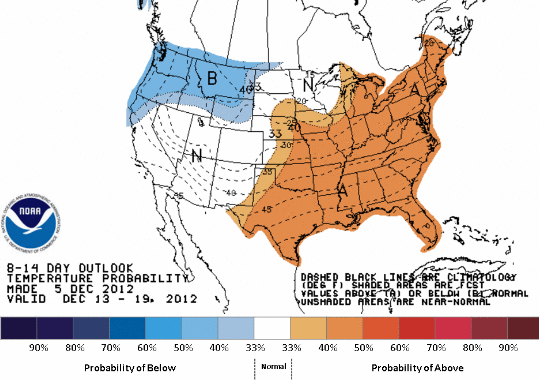 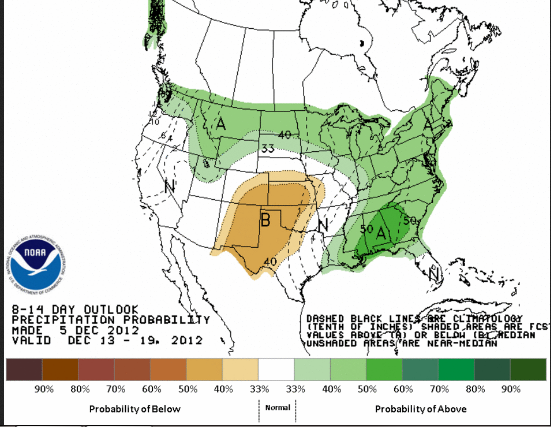