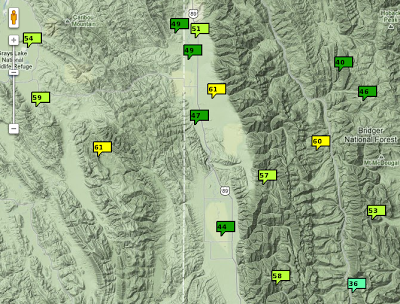 Temperatures warmed Thursday across all of Western Wyoming, with even 60F being reached at a few locations such as Star Valley Ranch and the Box Y Ranch.  It was cooler along the Salt River where the inversion persisted and highs were substantially lower in the 40s.  Following is a map of maximum temperatures on Thursday afternoon across the area:

There will be one more day of very pleasant temperatures prior to the approach of the storm system expected by Sunday.

The following sequence of 500 mb charts depict the storms system currently over the Gulf of Alaska  and its movement into Wyoming by later Sunday.

Precipitation which should spread across the region on Sunday will be snow at all elevations, with potentially heavy snow in the nearby mountains.  It does appear that several inches could fall in Star Valley during the day on Sunday along with gusty winds and falling temperatures.

The following in a link to the weekly video briefing from Riverton Forecast Office  for the coming weekend storm.