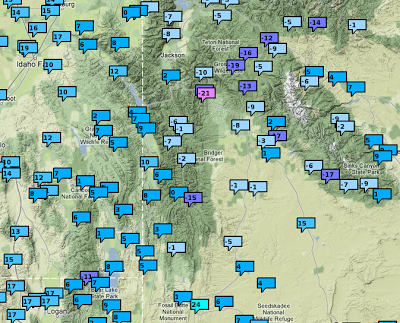 Temperatures dropped over much of Wyoming and adjacent states Sunday morning to unseasonably cold levels.  In Star Valley there was sufficient moisture and thin clouds to keep readings generally above zero.  The coldest noted was at the Thayne ES station with 2 above.  Even the typically warmer Star Valley Ranch station dipped to 9 above.

Other areas of western Wyoming did not fare as well. The coldest noted was -21 at Bondurant with unofficially as cold as -27 below on the west side of Yellowstone Lake.

Below is a map of the lows around the region this Sunday morning.

Not too far away from Star Valley the remote site on top of Logan Pass to the west of Bear Lake, ended up with the coldest for the U.S. excluding Alaska.  The graph from the Peter Sink site illustrates the low of -35F this morning. 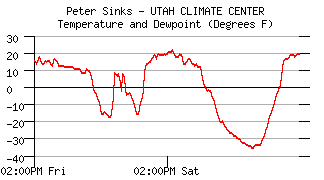 There was a colder reading in Alaska at a remote location in the western portion of the state. Following is a meteograph from that station.  It was down to -39F,  which actually was higher than the -43F on Saturday morning. 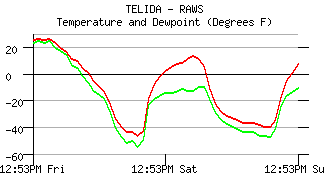 The 500mb analysis from this Sunday morning  shows the deep upper low that is dominating the weather conditions and promise at least one more cold night, prior to a gradual warming trend.

The air mass has been sufficiently unstable during the afternoon for convective snow showers developing over the mountains and then spreading to lower elevations.  Following is a link to an animation taken from the Star Valley Ranch cam looking west across the valley Saturday.