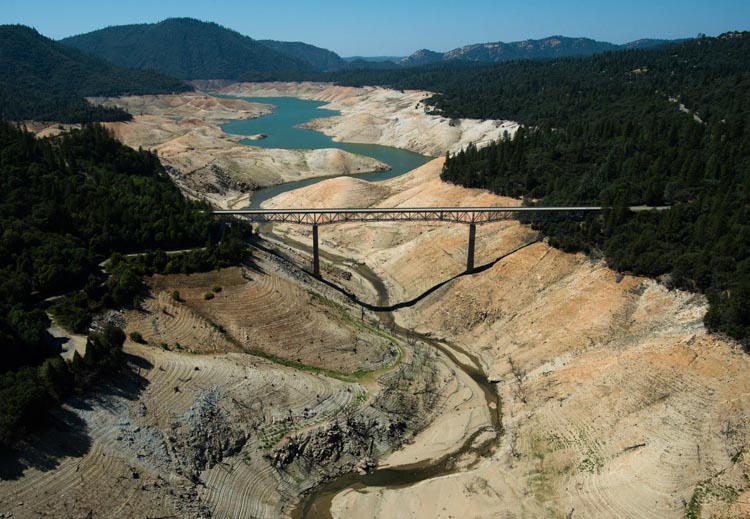 Drought conditions across California are just getting worse as exceptionally warm and dry weather is expected through the remainder of January 2015.  Following is a blog posted by Dr. Jeff Masters of Weather Underground summarizing the conditions.

By: Dr. Jeff Masters , 9:10 PM GMT on January 23, 2015
Share this Blog
Short Link
Full Link
35
+
The Western U.S. winter rainy season has reached its halfway point, and there is only bad news to report for drought-beleaguered California. November through March marks the period when California receives its heaviest rains and snows, thanks to the wintertime path of the jet stream, which dips to the south and brings wet Pacific low pressure systems to the state. The rainy season started out promisingly, with several December storms bringing precipitation amounts close to average for the month over much of the state. Troublingly, though, record-warm ocean temperatures off of the coast meant that the December storms were unusually warm. This resulted in snow falling only at very high elevations, keeping the critical Sierra snow pack much lower than usual. The jet stream pattern shifted during January 2015, bringing disastrously dry conditions to the state. January usually brings 4.19″ of rain to San Francisco, but no rain at all has fallen in January 2015 in the city–or over much of Central California. The dryness has been accompanied by near-record warmth at higher elevations in the Sierras, with temperatures at Blue Canyon and South Lake Tahoe averaging nearly 8°F above average for the month of January. As a result, the snowpack in the Sierras–a critical reservoir of water that is used throughout the rest of the year–is abysmally low, running about 30% of normal for this time of year. California’s eight largest reservoirs are 33% – 86% below their historical average, and the portion of the state covered by the highest level of drought expanded in mid-January–a very ominous occurrence for the height of the rainy season.

Figure 2. The same view of Lake Oroville in happier times: July 20, 2011. (Paul Hames/California Department of Water Resources/Getty Images) The forecast: hot and dryAn intense ridge of high pressure will build in over California this weekend, bringing near-record high temperatures in the low to mid-70s to San Francisco. The all-time hottest January temperature in San Francisco of 73°F, set just last year, could fall on Sunday. The ridge of high pressure will stay entrenched over California during the remainder of January, bringing continued dry conditions. A weak upper-level low pressure system will bring a few rain showers to the state beginning this Tuesday, but rainfall amounts will be generally less than 1/2″–an insignificant drop in a very large, dry bucket. With long-range models showing no shift in the jet stream pattern through the first week of February, California may be on its way to a fourth consecutive bone-dry rainy season–pushing the state into an increasingly dire drought situation.

Figure 3. Time series of the change in drought conditions in California from January 28, 2014 through January 22, 2015. The area covered by the worst category of drought–“Exceptional”–peaked at 58% during the summer of 2014. In December 2014, “Exceptional” drought coverage fell to 32%, thanks to heavy rains, but this area increased again to 39% in mid-January 2015 due to unusual dryness. Image credit: drought.gov.Related blog post: The State of the California Drought: Still Very Bad, January 13, 2015, by water resources expert Dr. Peter Gleick of the Pacific Institute.