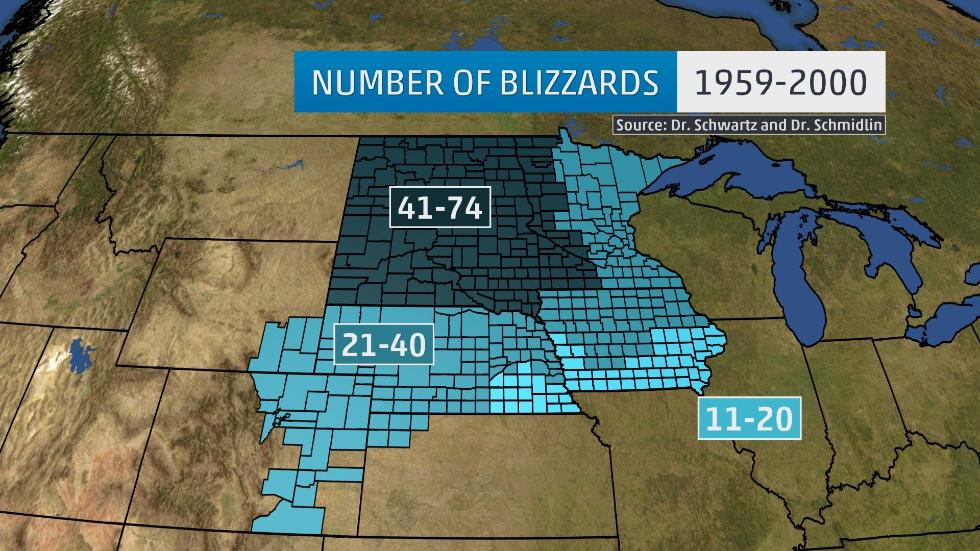 Yes, There Is a ‘Blizzard Alley,’ and It’s in the Plains

Tornado Alley is a familiar term, but have you heard of “Blizzard Alley?”

The term refers to an area in the Plains that tends to see more blizzards than other locations in the U.S.

First, it is important to understand what a blizzard is. The National Weather Service defines a blizzard when the following conditions are met for at least three hours: sustained winds or frequent gusts to at least 35 mph and considerable falling and/or blowing snow that frequently reduces visibility to less than a quarter-mile.

A 2002 study by Dr. Robert Schwartz and Dr. Thomas Schmidlin found a general area from the Front Range of Colorado and southeastern Wyoming into the Dakotas, Minnesota and Iowa where blizzards were most common.

The data for this study came from monthly issues of Storm Data from October 1959 through May 2000, looking for reports of a blizzard or blizzard conditions. Each report was tallied by county and date, as well as damage, injuries and deaths.

The highest concentration of blizzards occurred in the darkest blue-green color on the map below in North Dakota, South Dakota and western Minnesota. This area experienced 41 to 74 blizzards during this period. The study also found that this area averaged about one to two blizzards each year.

Blizzards were most frequent in the northern Plains, where 17 counties in North Dakota and 8 counties in South Dakota had more than 60 blizzards during the study period. Traill County, in eastern North Dakota, had the most blizzards, with 74 reported in the 41-year period examined.

More recently, the 2013-14 winter season saw a relatively high number of blizzard warnings issued by the National Weather Service offices in this region.

The Grand Forks, North Dakota, NWS office issued 11 that winter, compared to two in both the 2014-15 and 2015-16 winter seasons. Some of the warnings issued in 2013-14 were due to blowing snow produced by frigid air masses moving over a fluffy, dry snowpack. The NWS office in Rapid City even issued a blizzard warning on Mother’s Day Weekend 2015 due to Winter Storm Venus.

Outside of this most frequent zone, the rest of Minnesota, northern and central Iowa, most of Nebraska, northwestern Kansas, eastern Colorado, southeastern Wyoming and eastern Idaho all saw between 21 and 40 blizzards.

The annual probability of a blizzard exceeded 50 percent through all of North Dakota and Minnesota, as well as most of South Dakota, western Nebraska, northwestern Iowa and northeastern Colorado. This includes the cities of Minneapolis, Duluth, Sioux Falls, Rapid City, Fargo and Grand Forks.

So why does this area of the U.S. experience blizzard conditions more frequently than other areas?

One reason is the terrain of generally flat land, along with some hills and streams. The lack of trees also makes a difference in that trees provide friction that can help to lessen the wind. The combination of the land and the lack of trees allows strong, cold winds to blow southward from Canada across the northern Plains.

Also, this area is frequented by strong low-pressure systems intensifying to the east of the Rocky Mountains, tapping cold, Arctic air behind them. This means significant snow events in this area are often accompanied by strong winds, sometimes exceeding blizzard criteria.