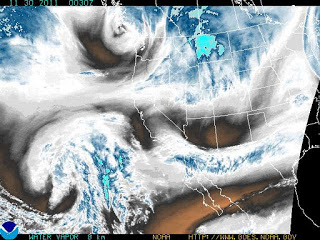 A storm which can be seen with the water vapor imagery this evening over Vancouver Island  will be the big weather maker  over the interior west the next several days.

By Thursday morning this low is forecast to drop southward to the west of Wyoming into the desert Southwest.  The computer models  have been  consistently forecasting this scenario for the past several days.

Much colder air will then flow southward from Canada into Wyoming by Thursday in the strong north/northeast flow as the upper low heads toward Arizona.

This type of pattern with much of the upper low energy tracking west of Star Valley should limit the snow potential.  At this time a couple inches are probably all that can be expected to fall over the valley by Wednesday night. While strong northerly winds will spread across Wyoming and down the upper Snake River Valley by Thursday morning, Star Valley will  be protected by the Salt Range limiting both the wind and wind chill effect in contrast to other areas of Wyoming.An exception could be in the Alpine area where the Snake River Canyon will likely channel the stronger east winds.

As cold air pours southward Thursday, afternoon temperatures will struggle to reach 20 and by evening rapidly fall to near/below zero.  With skies clearing by Thursday night  below zero will be common with coldest Star Valley locations such as Auburn and Thayne could drop to 10-15 below.

While any additional snow other than flurries is unlikely, cold high pressure will dominate into next week.

The Riverton WFO has provided an excellent presentation how the incoming storm will effect Wyoming.  This can be seen at: