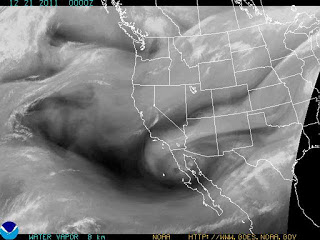 A fast moving upper level low pressure trough located over southern British Columbia Tuesday evening is expected to move quickly southeastward and provide a temporary return to winter weather over Star Valley on Wednesday.  The water vapor imagery below shows not only this trough but a weaker one over Northern Baja California

This system will strengthen as it moves across southeast Idaho and western Wyoming during the day on Wednesday.  Snow is expected to begin during the morning and as the system continues on  southeast to Utah and Colorado, the snow will end from the north by Wednesday evening. The Riverton Weather Forecast Office has created a graphic with the expected associated snowfall amounts by Wednesday Night. 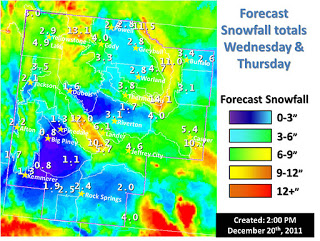 The greatest totals are expected in the higher elevations with 1-3 inches in Star Valley.

High pressure then provides a return to the conditions that have been experienced through much of December.  Cold nights, with temperatures generally below zero, will prevail into the Christmas weekend. Minimums could  possibly dip to 10-15 below by Thursday morning in coldest valley locations. It still appears that from Thursday until Christmas Day fair conditions will prevail with the potential for mostly sunny days.

However, the longer range models are now indicating that the high pressure that has been protecting Wyoming from storms much of December will be weakening next week.  The jetstream is now forecast to start tracking from the Pacific eastward across Wyoming.

This change in pattern, if it materializes, will result in a more active pattern across Star Valley.  Since it is almost a week away, the model predictability limitations preclude specifics at this time- although the snow potential could increase substantially in the last week of 2011.