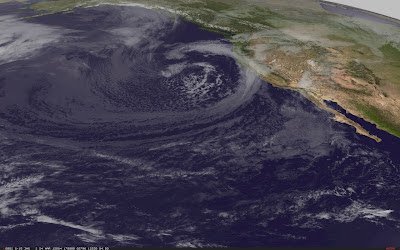 Any resident of Star Valley is very aware of the contrast between this and last winter.  Snow continued to pile up well into April in 2011. The CoCoRaHS observer located just south of Smoot in 2011 reported his greatest snow depth on April 10th of 52 inches.  Contrast that to this year where currently the Smoot observer as of March 24th, had a snow depth of 28 inches and dropping.  In 2011  the snow depth did not drop to 28 inches until May 12th!

Snow will continue to melt rapidly in the lower elevations this weekend as temperatures climb each day well into the 50s and possibly low 60s, which is 15 to 20 degrees above normal, and near records.

How long will this fine weather pattern last?  There is a large low looming off the west coast as seen in this satellite photo taken mid day Saturday

This low will be moving inland Sunday and crossing Western Wyoming Monday.  It will be moving rapidly with the primary impact in Star Valley to knock temperatures, at least temporarily, back to near normal and provide some precipitation.  Temperatures Monday morning should be cool enough as the primary energy with the trough passes, to produce at least some wet snow in the valley.  Amounts should not be significant, generally less than an inch, with clearing by evening.

Here is the forecast 500mb chart for mid day Monday.

The southwesterly flow pattern is re-established  by mid week which should lead to temperatures once again climbing to above normal levels, into the 50s

Looking further ahead to next weekend, there are indications that a much stronger system could be heading toward Wyoming.

This is far enough out in time that the models have to be used with caution.