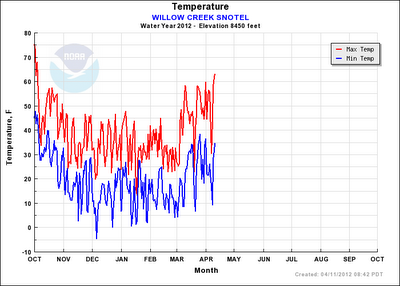 Wednesday will be the last of a string of exceptionally warm early April days.  Since Sunday, each afternoon has seen temperatures likely near  record levels. With the air mass quite dry the nights still have cooled off with around 50 degree ranges from minimum to maximum each day.  Here are the readings from across Star Valley from Sunday through Tuesday.

To provide some perspective as to how warm these last few days were, at the official Climatological Station 3SE Bedford, going back to 1975, the record for the month of April is 75F which occurred on the 25th in 1977.  Both Etna ES and Alpine exceeded this temperature on Tuesday.

The warm days were also experienced in the higher elevations.  At the Willow Creek SNOTEL site in the Salt River Range around 8500 feet daytime temperatures have been near 60.

As has been well forecast by the models, a change to a more typical mid April weather pattern is underway as this mornings 500 mb analysis shows the first in a series of upper troughs is moving inland toward  Wyoming.

A much colder upper low noted this morning in the Gulf Of Alaska will drop southeastward into the desert southwest by Saturday:

While the primary jet and energy with this upper low will track south of Star Valley, this is a cold and potent system.  The first trough moving across Star Valley tonight will bring showers and even a possible thundershower with the snow level lowering to the valley floor by morning.   Then periods of precipitation can be expected into the weekend primarily in the form of snow. Heavier amounts are expected to the south of  Star Valley, but given the forecast strength of the low moving inland by Saturday, a few inches accumulations can not be ruled.