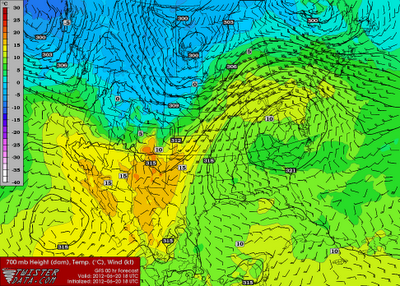 Wednesday, June 20th was officially the first day of summer.  However Star Valley, unlike most of the rest of the nation, experienced an unsummer like morning. Frost was reported in most low areas of the valley with Thayne Elementary dropping to 29. However the longest day of the year proved to be  one of the most beautiful ones in Star Valley as temperatures rose into the 60s with little wind.

Summer time temperatures will quickly become the rule for the foreseeable future.  By this weekend readings well into the 80s and possibly low 90s in the typically warmest valley locations will be the rule.

Following is a series of 700 mb charts beginning with today(Wednesday), showing the dramatic development of high pressure and warm air aloft over the region.

Besides the big warm up the development of a southerly flow on the west side of the large upper high will open the door for the potential of moisture moving toward western Wyoming by the first of next week.   The following series of precipitable water forecast charts  show this stream of moisture moving northward from the desert southwest.

The moisture that flows into Western Wyoming by the first of next week suggests the potential for thunderstorms, including lightning and gusty winds.    It is too soon to determine how much rainfall these storms could produce.  Any rain will be welcome, particularly into southern Wyoming as the most recent drought Monitor chart indicates drought conditions have develop as far north as southern Lincoln County.

The Spring runoff is essentially completed for this year.  The following two graphs from the Salt River gauge near Etna show what a difference a year makes.

Thus any rain that falls next week will likely do little to effect the already well below normal river levels.  Of greater concern will be the increasing threat of lightning initiated fires in the forests, which will be rapidly drying due to the heat and initially very low humidities.

However it may seem hot by this weekend in Star Valley with our 80s and even low 90s, but it must be kept in perspective when looking at the expected temperatures in much of the  United States.`