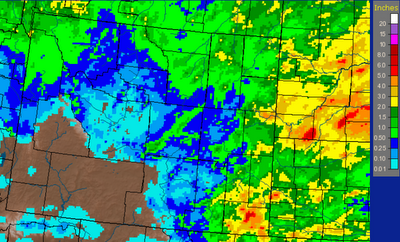 The following map of June Rainfall for the state of Wyoming speaks for itself.

Virtually no rainfall was reported in the southern half of Lincoln County.

A normal June rainfall map below is used as a comparison

The Bedford .15 was from the official climatological station and is by far the least reported for any June since the station was installed in 1975(37 years of  record). June averages about 2 inches at Bedford; the previous driest  was June 1978 with .48.

Not only was June very dry but it was very sunny. Following are the graphs of solar insulation for 2011 and 2012

Note that the average diurnal range for June at Thayne ES was over 42F degrees.  One third of the overnight lows were freezing or lower.  The last day of the month was the hottest with a high of 91.6 some 56 degrees above the morning low of 35.5!

It has been 3 weeks since the last drop of rain fell in Star Valley.  July is expected to begin hot and dry.  However there are indications that the Southwestern Monsoon will kick in during the coming week.  Southerly winds to the west of the large upper high over the  plains will favor increasing chances of thunderstorms into western Wyoming by or shortly after the 4th of July.