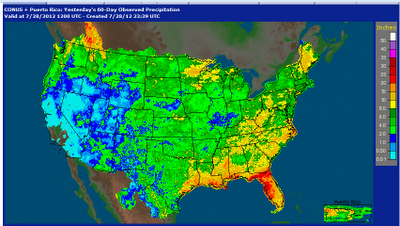 With July almost in the books, it is a good time to evaluate how Star Valley has fared with precipitation thus far. First it is of interest to take a look at the big picture as to the United States as a whole.  The media has certainly been playing up how dry it has been,  particularly in the central states.  The first figure will show the precipitation since around the first of June.

Indeed it has been quite dry with the exception of the Pacific Northwest and far Northern Rockies, as well as some areas along the Atlantic and Gulf  Coast. The next map will show the percentage of normal for the same 60 day time period.

The drought conditions are quite obvious  in the Plains states as well as many areas of the west.  Large sections of the corn belt has received less than 25 percent of normal, which will have a major impact on the harvest this fall.

Looking at Wyoming and particularly Star Valley for the past 60 days ending July 29th it has also been a dry summer thus far.

Large portions of western Wyoming have had less than an inch of precipitation with southern Lincoln county hardly none.

Comparing with the normal for the same time period

Less than half the normal amount has fallen over much of western Wyoming including Star Valley.

Here are some totals observed around Star Valley since June 1, 2012

The normal amount that can be expected to fall in the two month period is around 3 inches.  Most of the Valley has received less than half of normal.

Thus far in 2012 here is an image of the total precipitation along with the comparison with the normal. 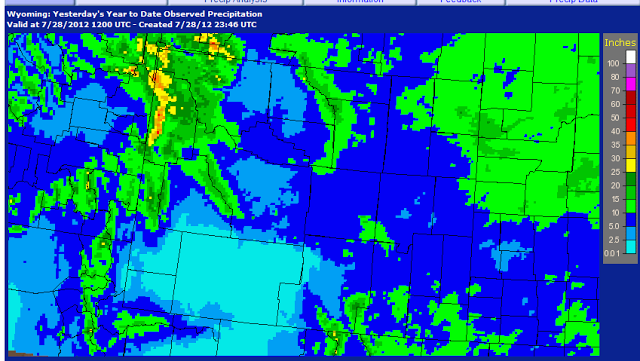 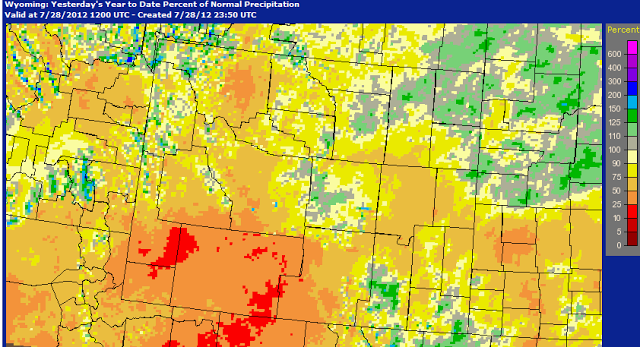 Hopefully as we go into the Fall months the pattern will change and allow the storm track to shift south  to across Wyoming.