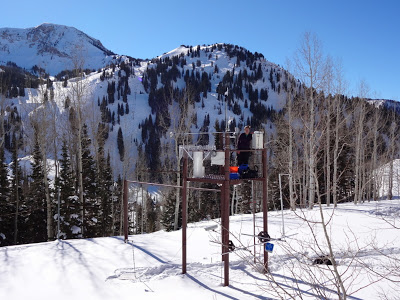 Snow is a major topic in Star Valley.  How much fell, how deep it it, what is the water content etc?  It is not a trivial matter to answer all these questions.  Jim Steenburgh  in his blog provides a very good discussion of the difficulties in keeping track of snow.

All observations are bad, but some are useful
– Paraphrased version of George Box quote
There is a tendency in meteorology to treat observations, especially
those that are collected in place by weather stations, as ground truth.
Meteorology is a data starved field, which contributes to the tendency
to place great value on any observations, but of course observations are
not perfect and one needs to consider the possibility of error.
There are two major sources of error in meteorological observations.
The first is observational error, which is the difference between what
is measured and the true value.  Such errors can by systematic, meaning
that they occur regularly, or random, which means they vary from
observation to observation. A good example of a systematic error is the
tendency for thermometers that are not well ventilated to overheat and
record a higher temperature than that in the free air when they are in
the sun on days with light winds.  A good example of a random error is
that related to round off.  For example, many observations are recorded
the nearest whole degree (fahrenheit or celcius) rather than with
absolute precision, and this introduces some error to every observation.
The second is representativeness error, which arises from the
observation simply not being representative of the area or location to
which it is being applied.  For example, we often use the temperature at
the Salt Lake City airport as indicative of the temperature throughout
the Salt Lake Metropolitan area.  While easy and convenient, this
observation often times departs dramatically from temperatures in other
parts the metro area, especially during inversions.
Yesterday provided a good example of how both observational and
representativeness errors can complicate the interpretation of snow
observations.  These observations are collected by automated stations
similar to the one below, which is our Alta-Atwater site (click to
enlarge).  There is an ultrasonic snow depth sensor that measures snow
depth from a stick mounted over a white board in the lower left of the
photo.  Typically such boards are wiped and repositioned either
following storms or at regular intervals of no frequently than every 6
hours.  The white cylinder on the platform is a precip gauge that
measures snow-water equivalent.

Here are automated snow amount, water equivalent, and water content
observations from four locations in Little Cottonwood Canyon from
midnight to 10 am.  These observations are based on ultrasonic snow
depth sensors, which measures snow depth on a white board, and
precipitation gauges that measure snow water equivalent.
Alta-Collins (~9700 ft): 6 inches, .23″ SWE, 3.8%

Elberts (~7600 ft): 3.15 inches, .09″ SWE, 2.9%
What is to be believed?  The Alta-Atwater and Alta Guard sites are
within a couple hundred yards of each other, yet Alta-Atwater has more
snow, less SWE, and lower water content.
There are many factors that contribute to the variability seen above.
One is that there were real variations in snowfall that contribute to
some of the differences between the two sites.  Two is that the snow
depth and precip measurements are essentially point measurements.  We
had very low density snow yesterday and even with a small amount of wind
can transport snow.  Thus a single measurement might not be
representative of the snowfall in the area around the observing site.
Think about how flow around the platform and other obstacles might
affect what is measured by the instruments at the Alta-Atwater site.
The effects are probably not large, but they aren’t zero.
Third, the snow-depth measurements aren’t fully consistent.  The snow
masurement at Alta-Atwater is based on a difference in measured
snowdepth at two times with no wiping of the board during the recording
period.  The snow measurement at Alta Guard is based on the addition of
two measurements taken before and after a wiping of the board.  Each
operating group has different approaches and times that they do this.
Fourth, most precipitation gauges are prone to undercatch, meaning that
flow across the gauge prevents all the snow from falling into it and
being recorded.  The winds were not strong yesterday, but the snow
density was very low, and low density snow is very prone to undercatch.
Some of the variations in SWE probably reflect variations in
undercatch.  For example, we have noticed that our site at Alta-Atwater
is very prone to undercatch, probably because it is mounted a few meters
above the ground, and this might explain the anomalously low SWE and
water content at the site.
Fifth, low-sensity snow can be a poor reflector of sound, and this can
lead to measurement errors by the ultrasonic snow depth sensor.
I can add a few more, but I think you get the point.  There are lots of
potential error sources and this complicated the interpretation of
automated snow measurements yesterday.  For this reason, snow geeks
typically supplement automated measurements with those taken manually. 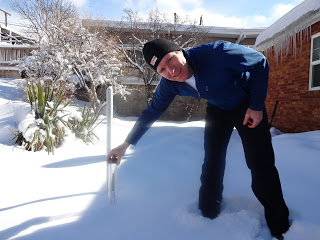 Yup, 250 years after the industrial revolution, and the old fashioned
way is still the best way to measure snow.  Of course, manual
observations have the disadvantage of not being on demand and all the
time.
Comments are closed.