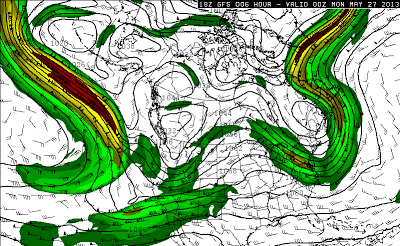 Memorial  Day will see the beginning of a change in the weather for Star Valley, leading to a rather unsettled week ahead. An unseasonably strong jet stream will be shifting eastward from the Pacific Ocean across the western states.  This will bring a turn to colder and wetter for much of the area from Idaho/Wyoming northward.

Here is a series of forecast charts for the 250 mb level(jet stream level) depicting this change.

The strong jet moves from the Pacific and by mid week has resulted in a large trough centered over Wyoming, bringing with it much cooler air and several periods of showers and thundershowers.  These will first show up mainly to the north and west of Wyoming on Monday  as the air mass gradually moistens and begins to cool.   Tuesday and Wednesday will see more widespread showers as the upper trough develops and the jet stream crosses the Western states to the south of Wyoming.

Here are a series of surface charts and model forecast precipitation.

It is quite apparent that precipitation will affect a wide area surrounding Wyoming this coming week.  The total precipitation forecast by the NWS for the next 5 days includes significant amounts as far south as western Wyoming, with a very wet week in store from Montana eastward into the Plains.

There is no doubt it will be cold enough for snow in the higher elevations of western Wyoming by mid week, with possible significant totals above 8-9000 feet. A mixture of rain and snow is possible as low as the floor of Star Valley by mid-week during the overnight and morning hours.  However any real accumulations are not expected at this time.

Travel into higher elevations such as Yellowstone NP, Wind Rivers and across the recently opened Bear Tooth Pass could definitely be impacted later this week.