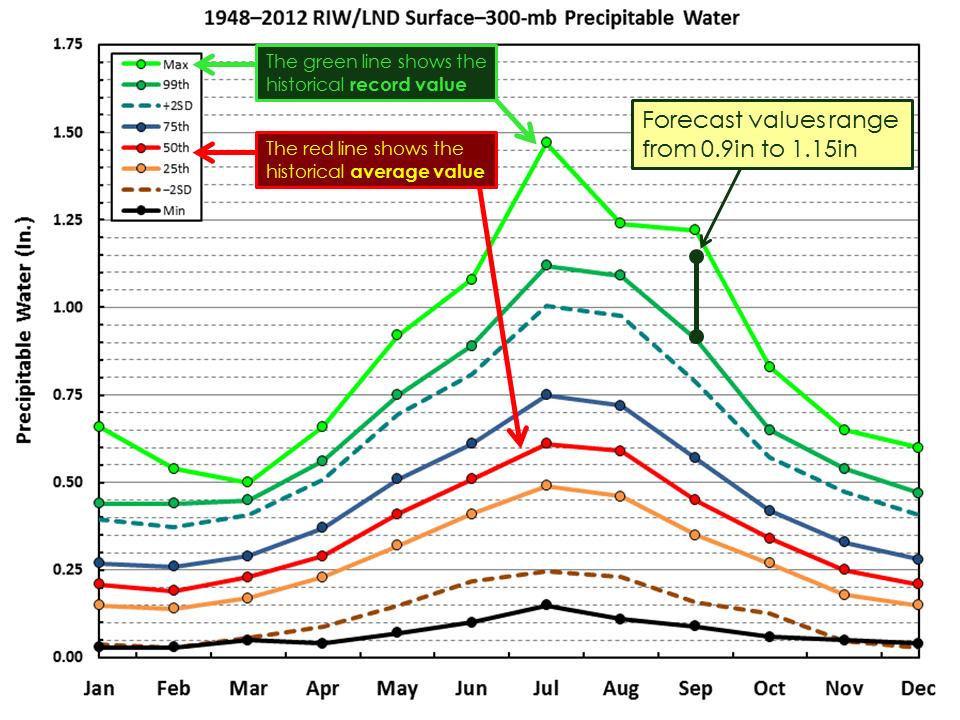 An abnormally moist air mass is streaming into Wyoming from the south as an upper low pressure moves northward from Utah into western Wyoming  by Friday.  The potential is significant for substantial amounts of rainfall to occur over the next 2-3 day, particularly over and along the eastern slopes of the mountain ranges.

An upper level low slowly shifting eastward will bring an unsettled pattern to the region for the next several days. The position of the low today and tomorrow will place much of the state in an easterly wind pattern, commonly referred to as an upslope pattern which is very favorable for precipitation – especially east of the Divide. In addition, an abnormally moist atmosphere will increase chances for heavy rain (see graph below) and some upper level dynamic support will increase the coverage of the rain and turn it into a more widespread event. Most of the heavy rain will be focused in the mountains as they provide a more significant source of lift, and in the foothills on the east and north side of mountain ranges like Lander, Jeffrey City, Casper, and Dubois.
This combination of factors raises the flash flood and mudslide risk for those in the mountains and near the recent burn scar areas in addition to the usual flash flood prone areas (small, steep, rocky basins and dry washes).
NOW is the time to figure out if you are in danger if the right storm hits one of these burn scars – Why are they so dangerous? Because it only takes less than one half inch of rain in less than an hour to cause flash flooding and debris flows in burn scars! The Sheepherder Hill burn scar has already produced a damaging flash flood this year and it could easily do so again. If you are unsure whether or not you are at risk from one of these scars after checking out the website, please give us a call at 800-211-1448 and we will do our best to help answer your questions.

An upper level low in the Great Basin will work northeast and bring plenty of moisture with it. Rain will be fairly steady across the southwestern half of the state through tomorrow with flooding possible. A Flash Flood Watch has been issued for the Central Mountains and Upper Wind River Basin from tonight through tomorrow to cover the more steady period of moderate to heavy rain. Areas of Utah and Colorado have received nearly 3 inches of rain from this system with multiple Flash Flood Warnings and road closures.

In summary, there is a good chance of measurable rain and even some localized flooding over the next several days with more steady rain expected through Thursday, transitioning to a more showery regime for the weekend.

If you are one of the many visitors or residents enjoying the outdoors today, please keep an eye on the weather, do not camp near creeks, streams, or dry washes, and remember – if thunder roars, go indoors!
Comments are closed.