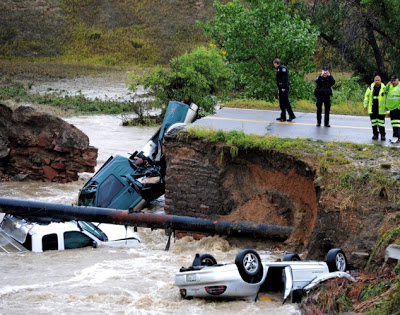 Now that the devastating flooding rains have lessened along the Front Range, information is now being posted as to how rare this event has been.  Following is a blog on the CoCoRaHS site that focuses in on how unusual the rains were in the Boulder area.

A Year’s Worth of Rain in One Week – Colorado Flooding

The devastating flooding along the Colorado Front Range has been headline news this week. No doubt most people have seen photos and video of the flooding and damage – they are all over social media as well as the typical news sites. If you have ever doubted the power of water the images coming out of Colorado should put those doubts to rest. The flooding extended from the Fort Collins area south to the west side of Denver.  The same rivers that bring spring meltwater out of the mountains to irrigate farms and fill community reservoirs along the Front Range are now raging torrents.

While a large area has been affected, Boulder, Colorado was the epicenter. Here are some climatological facts for Boulder rainfall to help place this in perspective

Boulder’s annual precipitation averages 20.68 inches, with an average of 1.68 inches in September.
For September 1-13, the U.S. Cooperative Weather Station in Boulder has received 14.74 inches of rain. This nearly three times the previous monthly September record of 5.50 inches in 1940! This is also the wettest month ever on record for Boulder. The previous record was 9.59 inches in July 1995.

Much of Colorado has been in severe drought or worse for more than a year, and Boulder and much of the area was on track for another very dry year. Through the end of August, Boulder’s precipitation for the year was 12.96 inches, which placed it in the top 30 percent of driest years in Boulder.

With the precipitation through September 13th, the total precipitation for the year so far is 27.70 inches, which now makes this year the second wettest on record. The wettest year on record is 1995 with 29.43 inches. There is no question that 2013 will eclipse this mark – the only questions are by how much and when.

Not only did the rainfall so far this month destroy the previous monthly record, but the 9.08 inches recorded on September 12 shattered the precious record of 4.80 inches measured on July 31, 1919..

While the U.S. Cooperative station in Boulder is the official record, rainfall totals measured by CoCoRaHS observers were just as if not more impressive. Here are the rainfall totals of 10 inches or more for the period September 9-14.