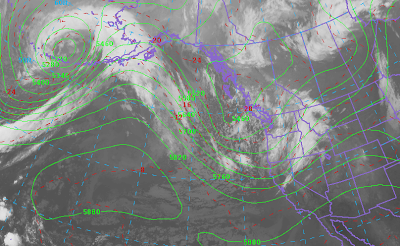 The Snow word has entered  into the forecast for Star Valley and much of Western Wyoming beginning later Wednesday.  So the question arises how much snow and when.  Forecasting snow amounts is one of the more difficult challenges for meteorologist, particularly in rough terrain such as in Wyoming. An additional uncertainty, due to the fact it is still September, is rain vs snow.

The system that is going to bring the big change over the next 3 days can  be seen in the satellite photo along the Pacific Northwest coast this morning.

Following is the 4-day sequence of 500 mb forecasts.

About the only certainty is that it will snow in the mountains and likely in the valleys above about 5500 feet by Thursday morning.  The computer models along with the forecasters at the National Weather Service are providing some forecast guidance for snow potential.  Following are some of the products for our area.

The first is a model probability forecast of both rain and snow.which indicates that precipitation will begin in the form of rain during the day on Wednesday and turn to all snow by Wednesday night.

The next model forecast is the total amount of precipitation expected in the next 3 days.

All the model solutions agree that precipitation begins Wednesday morning and continues at times through Thursday with totals ranging from one half inch to around an inch.

The next forecast is for the total amount of snow in the valley floor.

There is quite a spread in solutions for snowfall as would be expected given the many variables such as rain vs snow etc, but the mean suggest possibly up to 4 inches snowfall by late Thursday.  The actual accumulation would be less given the warm ground conditions.

The forecasters at the Weather Prediction Center of the NWS make forecasts based on these models for the next 3 days.  The first image is the expected 3 day total of precipitation, indicating a major event for much of northern and western Wyoming.

These forecasters also provide a probability product for chances of total snowfall reaching a certain amount over the next three days. 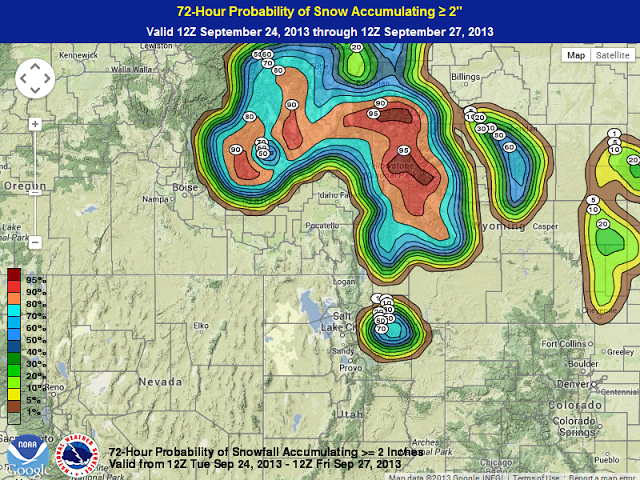 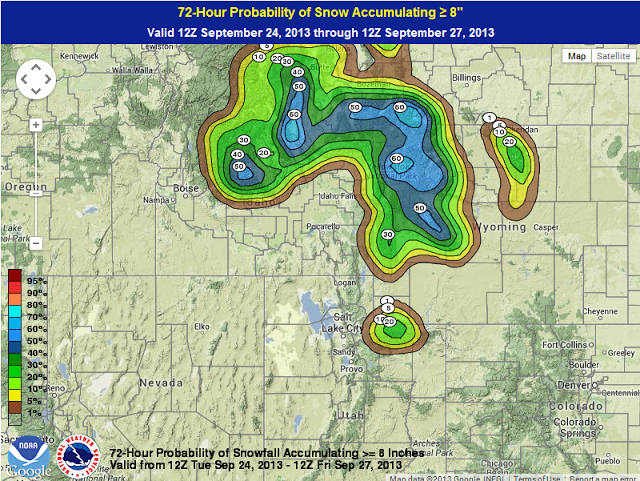 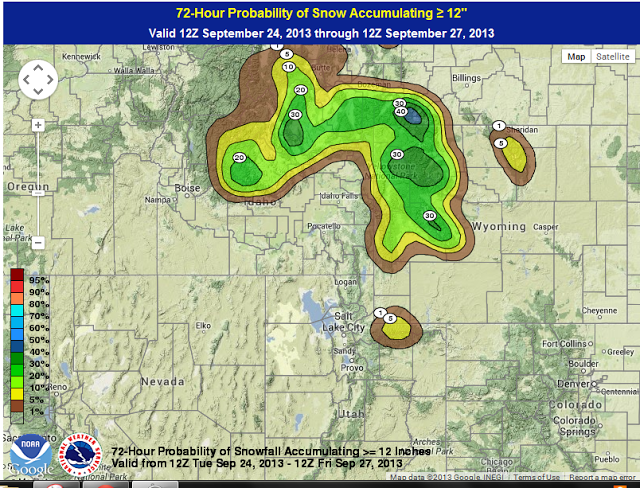 From these forecast graphics, Star Valley floor has about an even chance of 2 inches over the next 3 days with a near certainty in the mountains of much of western Wyoming.  Of more importance to hunters and those in the mountains of northwest Wyoming is a good chance of 8 inches and even 30 percent probability of a foot or more around YellowStone NP.