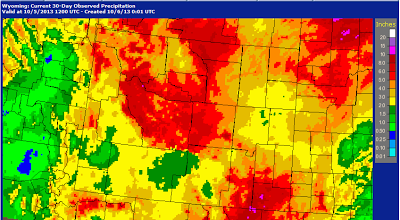 In the past 30 days almost all of Wyoming has received above to well above normal precipitation, making a big impact on the drought conditions of the past couple years. The following map displays the total precipitation that has fallen over Wyoming from September 5- October 5 2013.

This next map shows the percent of normal for the same period.

From the Wind River Mountains eastward across Fremont County from 200 to 600% of normal precipitation has occurred,

The Drought map for the state of Wyoming as of October 1st follows:

Since this map was created another major storm has occurred over much of central and eastern Wyoming further lessening the drought conditions.

The following table shows the percent of the state of Wyoming that was in varying degrees of drought conditions going back a year.

Steady improvement is noted,particularly in the last 3 months.