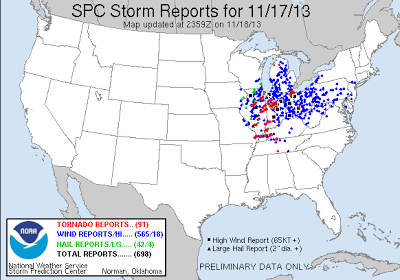 An unusual but not unprecedented  late season Tornado Outbreak hammered the Mid portion of the country on Sunday November 17th.  Cleanup is still underway with the death toll now up to 6 in Illinois.  Following is a plot of all severe thunderstorm events from Sunday.  A preliminary tornado total is up to 91, which will likely be consolidated once surveys are completed.

Thus far there have been two tornadoes rated as EF4, Washington IL and  New Minden IL.  Following are some photos that attest to the intensity of the tornadic winds.

This is evidence of another reason to live in Star Valley!