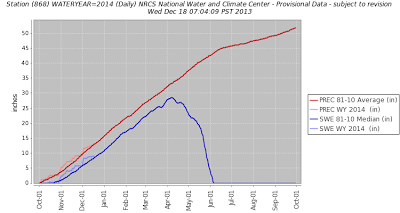 Snow cover currently across Star Valley ranges from between 2 and 4 inches along the river in the lower valley to over a foot near Smoot in the Upper Valley. These amounts are below a normal snow depth for the middle of  December, as the typical amounts would be around 6 inches in the Afton area and about 11 inches near Bedford.

However this is somewhat misleading as the higher elevations of the the Salt Range which provides much of the runoff in the Spring for the Valley have been generally above normal so far this Fall.

Examining the two SNOTEL sites that are in the Salt Range this can be seen.

Both sites have been running above the 30 year normals up to December 18 2013 both in total precipitation and the snow water equivalent of the observed snow pack for the current water year.

Much of Wyoming has been removed from any drought concerns due to the beneficial precipitation that has occurred since last summer. 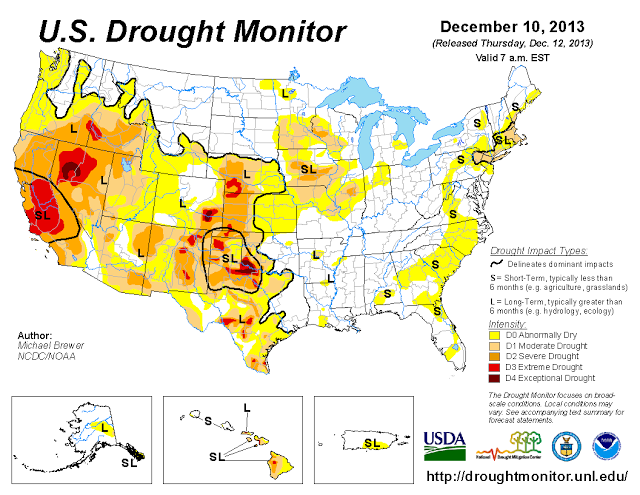 Following are maps for both this and last year in December that depict the improvement that has occurred in the drought conditions, not only in Wyoming but many others areas of the country.

Only California and Nevada have worsened in the past year.

Looking ahead as to what is forecast for this winter the Northern Rockies are the only area of the country that there is some degree of confidence that greater than normal precipitation will occur.

However the skill levels for a 3 month forecast are still limited.