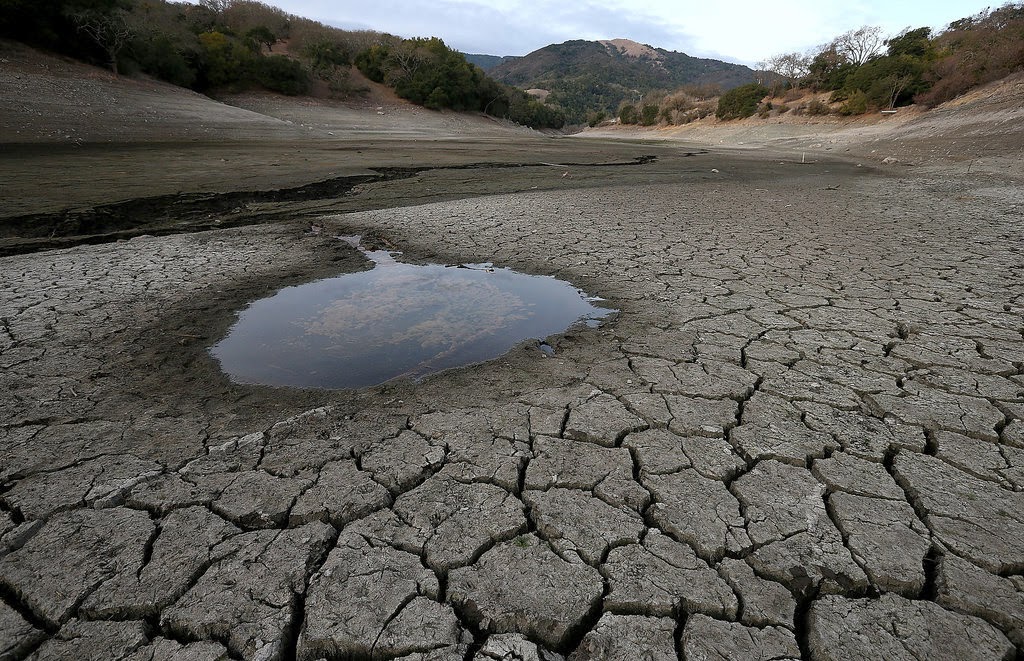 By Dr. Jeff Masters
Share
Published: 3:37 PM GMT on March 28, 2014
The California rainy season is bringing one final blast of moisture to the drought-parched state over the coming week. Strong low pressure systems will bring mountain snows and valley rains to most of the northern half of the state on Saturday and again on Monday, and widespread precipitation amounts of 4+ inches are likely. A Winter Storm Watch is posted for the Sierras, where snowfall amounts of 1 – 2 feet are expected over the weekend. Monday’s storm will likely dump another 1 – 2 feet, providing a critical boost to a drought-depleted snowpack that the state desperately needs to provide water during the hot, dry summer months. Rain-bearing low pressure systems typically stop bringing heavy rains to the state by mid-April, as the jet stream shifts to the north in its usual springtime migration. The 16-day GFS forecast is showing one more decent shot of moisture is possible on April 4, then a shift to a drier pattern will occur. The March 25, 2014 Drought Monitor is showing that 99.8% of California is in drought, with 95% of the state in Severe, Extreme, or Exceptional drought, a 2% rise from the previous week.

Figure 1. Predicted precipitation for the 7-day period ending on Friday, April 4, 2014. Much needed rains and snows are expected to fall in California in the coming week. Image credit: NOAA/HPC.

Cloud Seeding Can Help Ease California’s Drought
Extra moisture can be wrung out of clouds passing over mountain areas to increase the winter snowpack using cloud seeding. Such efforts have been made since the 1960s in the Sierras by the Desert Research Institute (DRI) of Reno, Nevada. During the winter of 2013 – 2014, DRI used six ground-based cloud-seeding generators in the Tahoe-Truckee Sierras of California and Nevada, for a total of 150 hours, to burn a solution of silver iodide, sodium iodide, salt and acetone. These generators were remotely operated by telephone, radio, or wireless communication, and released microscopic silver iodide particles which created ice crystals, then snow, in winter clouds. Six ground-based generators and a cloud seeding aircraft performed an additional 59 hours of cloud seeding farther to the south, in the Walker Basin Sierras. According to a Desert Research Institute cloud seeding fact sheet, wintertime cloud seeding does not diminish snowfall in areas downwind of the seeded area. DRI sums up the benefits of cloud seeding this way: “Research results have documented precipitation rate increases of a few hundredths to about 2 millimeters per hour due to ground-based seeding during the proper weather conditions. Based on the rate increases, estimates of augmented snow water from the DRI seeding program have varied from 20,000 to 80,000 acre-feet annually over the past 15 years of operation. Seasonal percentage increase estimates have varied from 2% to 10%. The cost of augmented water, based on the annual cost of the program, has ranged from $7 to about $18 per acre-foot.” The DRI cloud seeding project is state-funded. Future plans include the development of uncrewed drone aircraft for cloud seeding, which could be operational by the winter of 2014 – 2015. The U.S. Bureau of Reclamation projects that cloud seeding could supply the Colorado River watershed with up to 700,000 acre-feet of water per year by 2035, and 1.7 million AF by the year 2060, at a very low cost of $30 – $60 per acre-foot. By comparison, the Colorado River, which is a primary source of water to Southern California, typically supplies 15 million acre-feet of water each year to the U.S. (an acre-foot is the amount of water needed to cover an acre of land to a depth of one foot.)

I’ll discuss several other ways California can get more water in future blogs posts in the coming weeks. Have a great weekend, everyone!