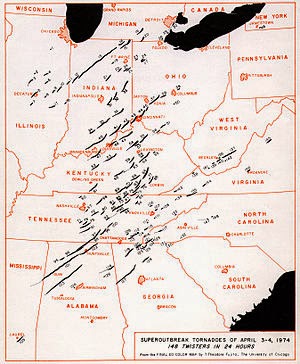 While April 1st is known for playing pranks etc, April 3rd is also a well known date in history, and it is no joke.

It was 40 years ago on April 3rd 1974 that a historical Tornado Outbreak occurred that resulted in widespread damage and many fatalities across the middle of the country.

While April 3rd 2014 is not expected to be a repeat of 40 years ago, nevertheless there is the potential for  damaging long track tornadoes in the central U.S.

Following is a blog from Dr. Bob Maddox who regularly provides insight on primarily Southwest weather at

Forty years ago today the infamous tornado outbreak of April 3rd and 4th, 1974 was just about to begin. Above is one of the maps of tornado tracks during that outbreak, produced by Ted Fujita. There were 148 confirmed tornadoes in this outbreak, of which 30 were rated F4 or F5. There were over 300 fatalities caused by this event. Photo below is of the tornado that struck Xenia, Ohio, the afternoon of April 3rd, 1974. 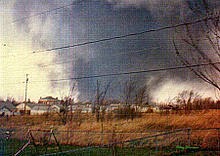 Today the SPC has issued a forecast of a moderate risk of severe thunderstorms (above) ahead of a strong short wave moving eastward from the southern Rockies. The national hazards map from NWS below indicates a wide variety of active weather today. the yellow area indicates two tornado watches that are already in effect this morning. 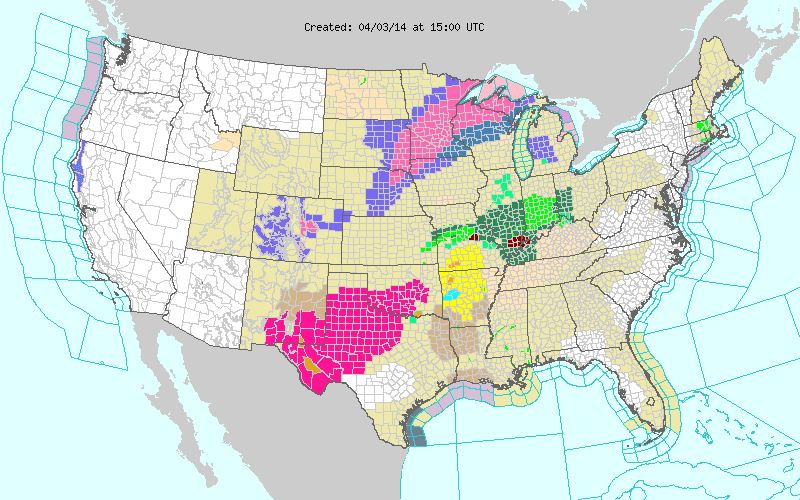