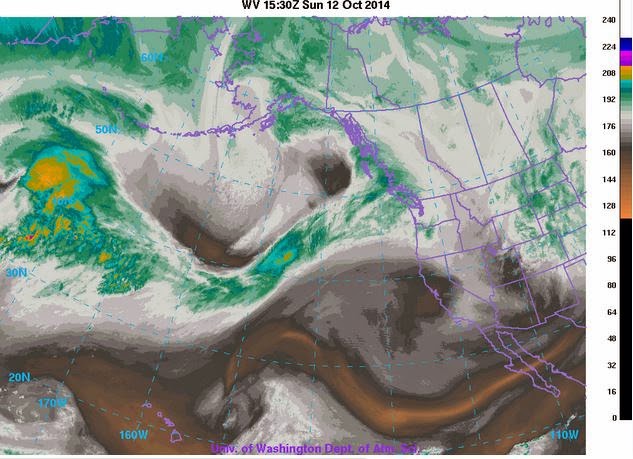 Of the many bands of imagery provided by GOES satellites that orbit above the equator is water vapor.  It is a valuable observational tool but not with regards to actually measuring water content in the atmosphere.

The  Wasatchweatherweenies  blog provides an informative discussion of what the use of Water Vapor Imagery and what it actually observes.

Use and Misuse of Water Vapor Imagery

By Jim S
Water vapor satellite images are frequently misused and misinterpreted.  Here’s a very basic primer.
Water vapor images do not measure water vapor and they certainty do not measure water vapor in the lower atmosphere where it plays an important role in the development of precipitation systems.  Water vapor imagery is simply based on a band of infrared radiation that is absorbed and emitted by water vapor.  This contrasts with the band of infrared radiation sampled by conventional infrared satellite images which is largely unaffected by the presence of water vapor or other atmospheric gases.
As a result, water vapor imagery is strongly influenced by the distribution, temperature, and concentration of clouds and water vapor in the upper troposphere, typically at altitudes above 500 mb (5500 meters).  A prime example is the water vapor loop below, to which I’ve added contours of precipitable water (i.e., total integrated water vapor).  Note the northward spread of cirrus clouds and upper-level moisture from into Utah over the past two days.  As ominous as this looks, it is simply a very thin, cold layer of clouds and moisture.  The juicy air associated with tropical storm Simon remains well to the south, as indicated by the precipitable water contours, and is just beginning to push across the US–Mexico border.