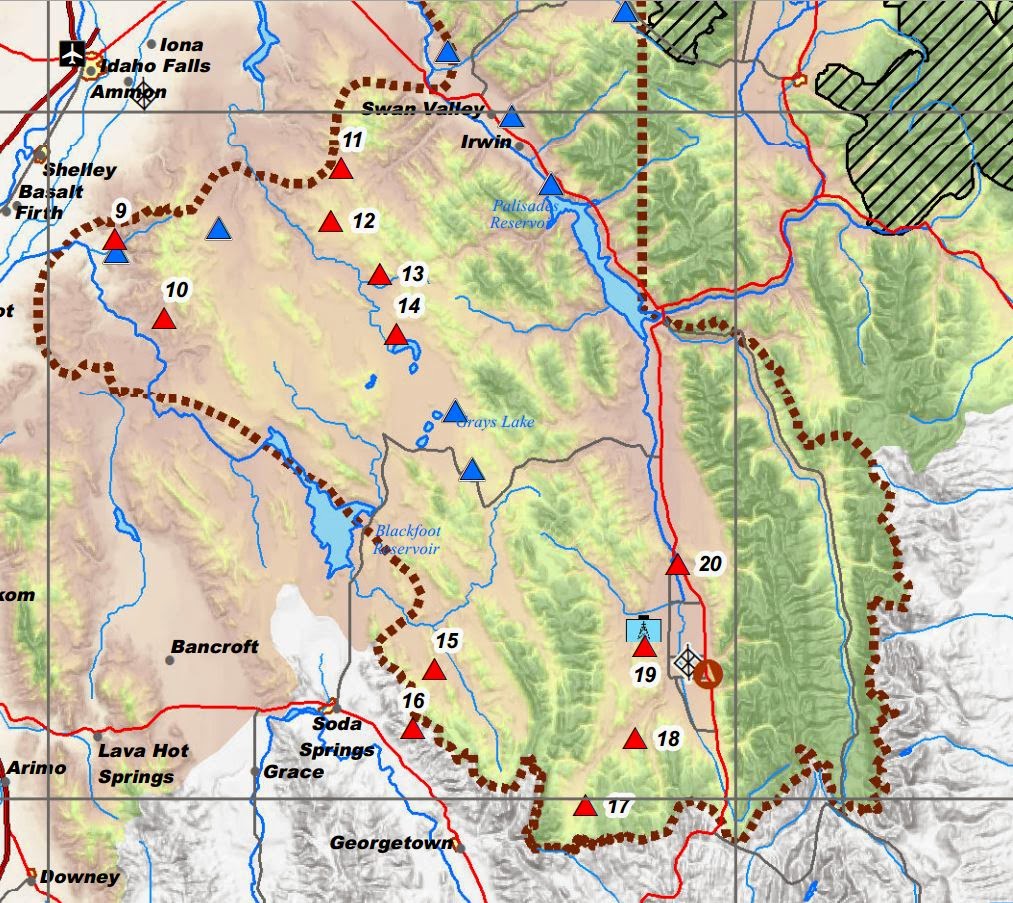 The Winter of 2014-2015 will be the 3rd in which active cloud seeding has been conducted in Star Valley with the goal of enhancing the snow pack over the Salt and Wyoming Ranges. The seeding is being done by Idaho Power out of  Boise ID who provides electricity across Southern Idaho and Eastern Oregon.

I was given an opportunity to submit questions  about cloud seeding by Idaho Power as it relates to Star Valley. Derek Blestrud, one of the three Idaho Power  meteorologist, responded with very informative answers.

Idaho Power first started looking into cloud seeding in the early 90’s in response to a question from a shareholder.  After an extensive literature and climatology study, Idaho Power first contracted a cloud seeding program in the 96-97 winter seasons in the Payette River Basin north of Boise.  The project was soon suspended due to excessive snowpack.  In 2003, Idaho Power began operating its own cloud seeding project in the Payette River Basin.  In 2008 Idaho Power began working with the High Country RC&D and expanded operations into the Upper Snake Region.  In 2006 the State of Wyoming released the results of a Level II feasibility study evaluating cloud seeding potential in the Salt and Wyoming ranges.  In 2010, Idaho Power working with the Western Wyoming RC&D to build upon Wyoming’s feasibility study and began collecting weather data to further evaluate the feasibility of cloud seeding in the Salt and Wyoming Ranges of western Wyoming and began seeding in 2012.  In 2013 Idaho Power conducted aircraft operations over the Wood River Basin of central Idaho.  This year further expansion is being conducted into the Wood River Basin as well as the Boise River Basin.

Determining the benefits of cloud seeding have a lot of variables.  The main variable is targeting or lack thereof.  This can be a function of cloud seeding generator spacing and elevation as well as aircraft operations and storm conditions.  Never the less, literature shows that a well run wintertime orographic cloud seeding program can increase precipitation by 5 to 15%.  Using a target/control analysis over the Payette target area since seeding began in 2003 has shown over a 14% increase during that time frame.  Idaho Power is also working with the National Center for Atmospheric Research (NCAR) to develop a real-time cloud seeding model that simulates cloud seeding within a high resolution WRF model (1.8km).  Currently this model is in the development state, but has shown values similar to what the target/control analysis is showing.

Cloud seeding works best when there is an abundance of supercooled liquid water(SLW) within a storm system and a lack of ice nuclei as well as a wind direction that will provide enough orographic lift to transport the seeding agent into the storm system and areas of SLW.  The most common time that this occurs is when there is a warmer wintertime storm system that is very shallow, does not have the upper cold portion of the cloud to feed ice crystals into the SLW layer.  Silver iodide works best for cloud seeding between the temperatures of -5 to -15°C(23 to 5F) with the sweet spot between -8 and -10°C(18 to 14F). At warmer temperatures, freezing of the SLW is just too slow to produce precipitation increases with silver iodide.  At cooler temperatures, the clouds become adequate in supplying the SLW layer with ice crystals to naturally seed the cloud.

This is somewhat of an unknown but we are working with NCAR to model increases from snowfall in a spatial form.  The current thinking is that there are potentially some increase in  Star Valley, but they are limited.  The reason behind this is that we are growing snowflakes using the updraft produced from the mountains.  This would occur over the Salt and Wyoming Ranges to the east.  We do have generators that are placed further west in Idaho that could potentially increase precipitation in  Star Valley, but the increases will typically be minimal in the valley areas and more at higher elevations. It is also important to remember that cloud seeding augments snowfall.  Let’s say that we could potentially increase snow by 10%, that would mean that if we had 10 inches of snow in Afton, only 1 inch of that would be from cloud seeding.  When we originally began cloud seeding in the Payette Basin, we worked with snowplow operators to determine what the additional snow would have on their operations.  They indicated to us that the additional little bit of snow didn’t  affect what they were doing.  If they already had to have plows out, it didn’t matter if they had to remove 9 or 10 inches of snow.

The primary benefactors are anyone that uses or depends upon water.  As a power company, our hydro projects are downstream of numerous users.  We are essentially at the end of the ditch so all others that are higher in the watershed use that water before it gets to us.  To better understand how that additional water benefits groups, follow it downstream. By adding additional snow pack to a watershed, that watershed becomes healthier.  There is more water available for plants and animals. The additional snow on the ground also helps with recreational uses such as snowmobiling, skiing, snowshoeing, etc.  The increased snowpack also supplies additional runoff that provides better habitat for fish and recreational uses along the rivers such as fishing and white water sports.  This additional water is then available for farmers to irrigate crops and for other municipal uses.  The water that is left over then runs through Idaho Powers Hydroelectric generation facilities to create cheap, clean energy which helps to reduce electricity costs to our consumers.

This year Idaho Power is using 3 internal full time meteorologists as well as a contract meteorologist that will be with us through the winter..

In the past, we have forwarded them onto the NWS offices but haven’t done that in the past couple of years.  We are currently working on a way to allow those interested in the data to have a way to receive the data.  This database will also include all of our high resolution precipitation gauge data, ASOS information, radiometer data, and high resolution WRF model data.  More on this as we work through internal hurdles as we develop this database.

An additional article about cloud seeding, primarily across Colorado can be accessed in the following link