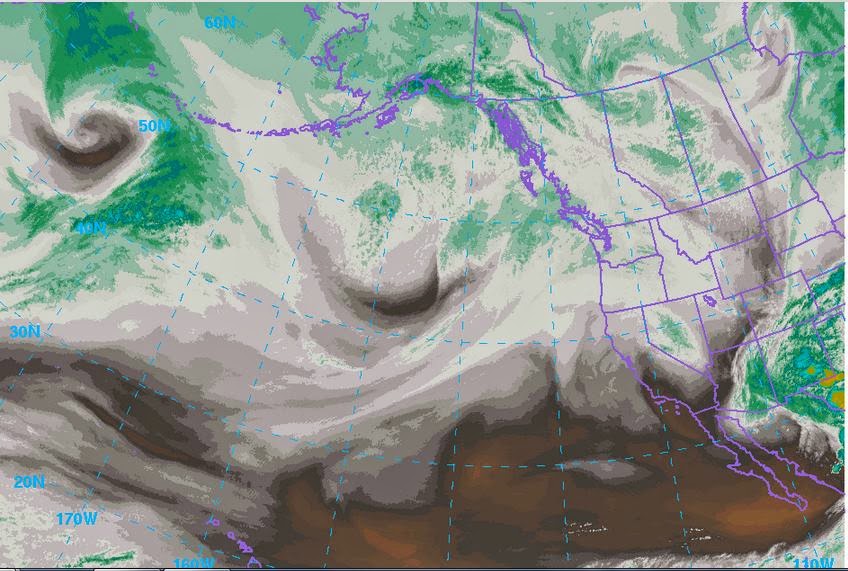 Star Valley and surrounding areas will return to snowy conditions this coming week as a strong system from the Pacific moves inland and intensifies over the Rockies by mid week.  Monday will be a beautiful day as under sunny skies, temperatures climb above 60F by afternoon.  However Tuesday will see changes as winds and clouds increase ahead of a strong cold front and the developing upper low pressure trough.

The mid day water vapor image over the eastern Pacific shows the system that will bring the changes.
The 500mb chart for the same time follows.

Following are the model forecast of the development of this trough into the storm system over Wyoming by mid week.

By Wednesday AM the cold front will have move across western Wyoming and snow will be occurring over much of the area including Star Valley.

A high resolution model forecast of the total precipitation across the area through late Wednesday afternoon indicates upwards to a half inch of liquid over the nearby mountains in Star Valley to over an inch across Tetons. Much of this will be in the form of snow, which could result in several inches in Star Valley and upwards to a foot over the mountain ranges across Western Wyoming south into Northern Utah.

Still uncertainty exist as to how much snow will accumulate in Star Valley, however this is a major storm and could impact travelers by Wednesday morning.