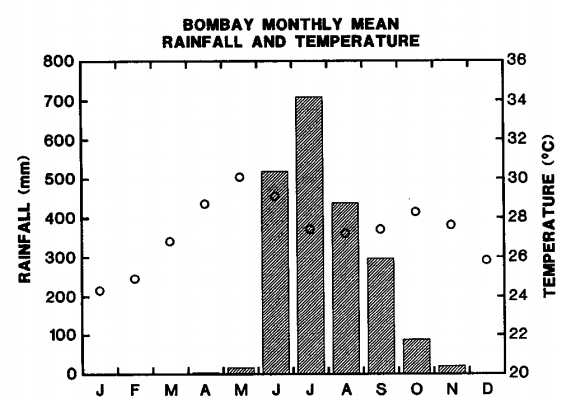 Much of the summertime precipitation over Western Wyoming falls from thunderstorms.  The moisture fueling these storms is associated with the northern fringes of what is known as the North American Monsoon.

Jim Steenburg of the University of Utah provides an excellent discussion of the North American Monsoon.

What Is the Monsoon?

By Jim S
We’ve reached the time of year where the word monsoon is used to describe just about everything related to the weather.  Monsoon moisture.  Monsoon rains.  Monsoon storms.  Just what is the monsoon?

Monsoon derives from the Arabic word mausim, which means season or wind shift.  Monsoon has traditionally been used to describe the alternating wet and dry seasons that occur during the summer and winter, respectively, in India and southeast Asia.  For example, the monthly rainfall in Bombay shows the dramatic contrast between the wet (roughly June to September) monsoon and dry monsoon on the west coast of India.

The signal of the North American monsoon is less pronounced, but strongest in Mexico, as illustrated by the monthly rainfall data from Badiraguato in the mountains of western Mexico (note the rainfall scale change).

The word monsoon is often used to describe not only precipitation but also the large-scale circulation, land-surface, and ocean/sea changes associated with the wet and dry seasons.  In North America, the focus is usually on the wet season of Mexico and the southwest U.S. from about June to September or October.  North American Monsoon or North American Monsoon System refer collectively to the precipitation, atmospheric circulations, land-surface conditions, and ocean/sea conditions occurring during this period.

Precipitation during the North American Monsoon is produced by convection (e.g., showers and thunderstorms), more organized mesoscale convective systems (sometimes called MCSs), and tropical cyclones and their remnants.  Moisture sources include the Gulf of Mexico, the Gulf of California, and the tropical and subtropical eastern Pacific.  The contribution of these regions has not been fully quantified and varies geographically, from year to year, and from storm to storm.

Thus, it can often be difficult to ascertain whether or not the precipitation produced in Salt Lake originated from the monsoon region (i.e., the Gulf of Mexico, Gulf of California, and tropical and subtropical Pacific).  In addition, many of our storms this time of year and in the early fall (especially September) occur as traditional midlatitude systems (e.g., fronts, upper-level troughs) interact with moisture originating from the monsoon region.  Most of the time, any elevated moisture and precipitation occurring in July and August in our area is called “monsoonal” although there are times when this moisture and precipitation may have stronger ties to the midlatitudes.

Every year, the North American Monsoon takes on a different flavor.  It’s onset, end, geographic extent, and intensity vary from year to year due to a variety of factors, including the fickle nature of atmospheric convection.  Even in an active monsoon year, one can sometimes find a few locations with below average precipitation simply because they missed out on the thunderstorm activity (and vice versa, there can be locations that get a lot of precipitation during a relatively poor monsoon year).