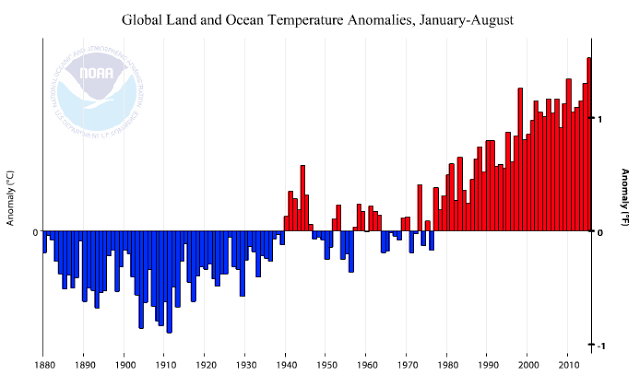 The latest on how the globe continues to warm up courtesy of Jim Steenburgh blog.

2015 Easily on Pace for Warmest on Record

By Jim S
Last week, the August climate numbers were released by the National Centers for Environmental Information (NCEI) and not surprisingly 2015 continues to be a hot one.

For the January–August period, 2015 is well ahead of any previous year on record for global average temperature and a full 0.1ºC ahead of second place 2010.

These big numbers reflect the long-term global warming combined with the strong El Nino that has developed in recent months.  Similarly, 1998 was a remarkably strong El Nino and it was a real outlier in terms of temperature (see the top bar chart).  Those wishing to argue that global warming “stopped” have frequently used 1998 as the start point of their time series as it results in a relatively flat trend over the last several years.  As we have discussed (see Global Warming Hasn’t Stopped), global warming never stopped, even if the short-term trend in global atmospheric temperatures was small, and it was only a matter of time until the shorter-term trend produced by climate variability (such as associated with the development of a strong El Nino) phased with the long-term trend in a way to give us a big warm up.  That time is now.