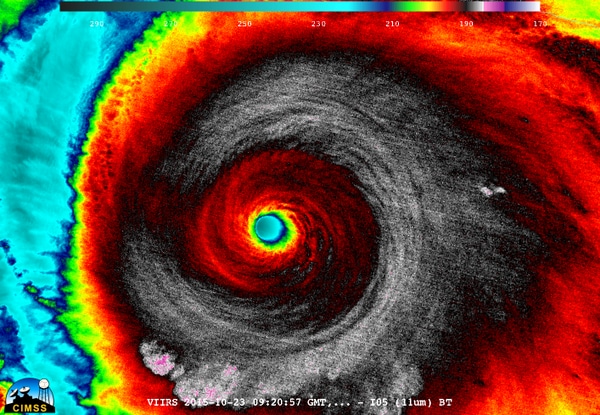 Hurricane Patricia, October 23, 2015. (NOAA)
After attaining peak winds of 200 mph early this morning, Hurricane Patricia became the strongest storm ever recorded by the National Hurricane Center. It jumped to the top of a notorious list of the western hemisphere’s most vicious storms, dating back decades.
[‘Potentially catastrophic’ Patricia becomes strongest hurricane ever recorded, to slam Mexico today]
The record Patricia established spans not only hurricanes that impact western North America, but also those that impact eastern North America and the Caribbean.
The four storms which Patricia now looks down at are:
The unnamed hurricane of 1935 which struck the Florida Keys was also estimated to have peak winds of 185 mph.  However, estimates of hurricane peaks winds prior to the 1970s are very uncertain as there were no weather satellites watching these storms.
Let’s take a look back at each of these storms, and what defined them:
Hurricane Allen, 1980 Track of Hurricane Allen (1980)
Allen peaked in early August 1980 south of Haiti, where it killed over 200 people.  In the U.S., it is most remembered for its impact in south Texas, where – as a weaker storm – it moved ashore with 125 mph winds.  It produced up to 20 inches of rain and a storm surge up to 12 feet.
“Since this portion of Texas and Mexico were sparsely occupied, casualties were low, with only six deaths reported in Texas,” a NOAA Web site said.
Hurricane Wilma, 2005

Hurricane Wilma track, 2005. (NOAA)
Almost exactly a decade ago, Wilma exploded in intensity, deepening from a tropical storm to a Category 5 hurricane over the course of a day in the western Caribbean. It set the mark for the most rapid strengthening in the tropical Atlantic on record.
[Ten years ago, Hurricane Wilma underwent most extreme intensification in Atlantic history]
Wilma made landfall in Cozumel as Category 4 hurricane. NOAA reported at least 19 people were killed from Wilma’s rain and wind across the Caribbean and Mexico.
It then curled northeast to the southwest coast of the Florida peninsula where it made landfall near Naples on October 24 as a Category 3 storm. At least five deaths were directly attributed to the storm.
Hurricane Gilbert, 1988 Hurricane Gilbert track, 1988. (NOAA)
Gilbert experienced an extraordinary period of rapid intensification on Sept. 13 near the Yucatan Peninsula.
“Gilbert crossed the northeast coast of Mexico’s Yucatan peninsula on September 14th, becoming the first Category 5 hurricane in the Atlantic basin to strike land since Camille in 1969,” NOAA said.
After slamming the Yucatan Peninsula, Gilbert entered the Gulf of Mexico but spared the U.S. Gulf Coast, instead drifting into northeast Mexico south of the Texas border.
“Gilbert’s large size and impacts were felt over much of the Caribbean, Central America as well as portions of the United States,” NOAA said. “The death toll of 318 gives an idea of the scope of Gilbert’s impacts: Mexico 202, Jamaica 45, Haiti 30, Guatemala 12, Honduras 12, Dominican Republic 5, Venezuela 5, United States 3, Costa Rica 2, and Nicaragua 2.”
Hurricane Linda, 1997 Track of Hurricane Linda, 1997.
Prior to Patricia, Linda held the record for the strongest hurricane to form in the Northeast Pacific Ocean. But with the exception of Socorro Island where it damaged some weather instruments, the storm remained over the ocean.
It attained its maximum intensity on Sept. 12, 1997 over the ocean.
Some of the storm’s moisture reached southern California, contributing to some rain. Waves generated by the storm reached 15 to 18 along the coast.
What sets Patricia apart from the others
Of all of the above monster storms, none of them struck land at peak intensity.  They either weakened or, in Linda’s case, stayed out to sea. Patricia is forecast to make landfall very near if not right at peak intensity.
The closest analog to Patricia in recent decades would probably be Super Typhoon Haiyan which hit a high populated portion of the Philippines when it was very close to its maximum intensity.  Its death toll was over 6,000 people. The area of Mexico that Patricia is forecast to impact is not as densely populated, which should reduce the amount of destruction and numbers of human casualties.
Going back further, the 1935 Florida Keys hurricane was also near maximum intensity at landfall, and is the most intense hurricane known to ever hit the U.S.   That storm, which produced a devastating 20 foot storm surge, killed 408 people, NOAA said.