Cliff Mass meteorology professor at the University of Washington recently blogged on the improvement in the California drought.

The drought is over in Washington and Oregon and now California is getting relief.  Major relief.

In some ways, the improving trend was expected.  This is a very strong El Nino year and such years often bring heavy precipitation to California, particularly after January 1.

Let me start by showing you the forecast total precipitation for the next two weeks from the National Weather Service GFS model. Much of California gets 5-10 inches.  As Darth Vader would say:  impressive, most impressive. 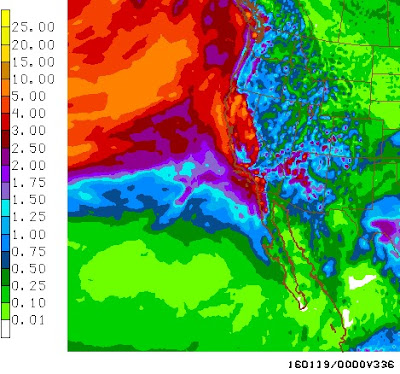 The UW WRF model, which generally is superior to the GFS over terrain shows 2-5 inches over northern CA during the next 72 hr alone.

And the official Climate Prediction Center 8-14 day precipitation probability is emphatic with above normal precipitation over California.

The good news is that all this precipitation will fall on a state in which the situation has already started to improve. The latest snowpack measurements show the Sierra Nevada snowpack is well above normal. 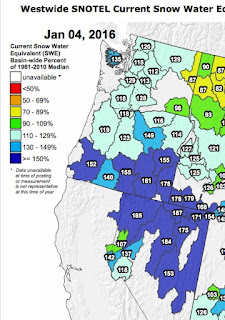 And the GRACE satellite soil moisture measurements show most of California wetter than normal, with the exception of the far SE side of the State. 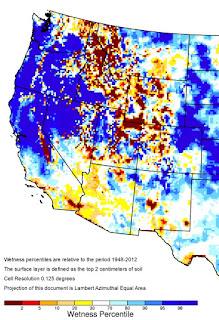 But with all the good news, one must consider that California’s reservoirs are quite low as a result of a multi-year drought–roughly 50% of normal, as shown by this summary of the major reservoirs below.  California has a very large number of reservoir and immense storage capacity.   During the next few months, substantial rains should greatly increase the reservoir storage.  I suspect this will be the turn around winter for CA and the end of the several year drought.  But it may take several years to fully recover.

The approaching period of heavy rains has emergency management folks worried about California flooding and landslides.  The LA Times has a big story on this:

Finally, it should be stressed that the large scale circulation patterns over the western U.S. are radically different this year than last. For example, we have not seen much evidence of the persistent West Coast ridge of the last few years and the BLOB is gone.   There is no reason to expect a repeat of last year.