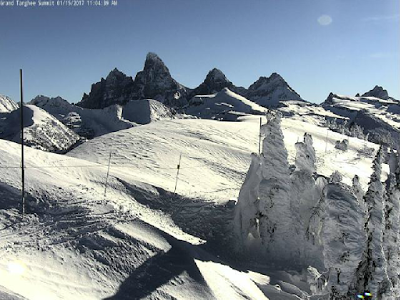 With the current lull in the somewhat snowy winter of 2016-2017 in Western Wyoming, it is a good time to take stock as to where the snow pack stands.   Throughout all but the northeastern part of Wyoming the snow water equivalent as of January 15 2017, is above to well above normal.

Of most interest to Star Valley is the status of the Snake River Basin.  The following is the reports of the SNOTEL sites that measure the snow that would flow into the Snake, Grey and Salt Rivers during this Springs runoff.

The total precipitation that has occurred since Oct 1 2016 is well above normal at all sites with the Grassy Lake SNOTEL  located near the southwest border of YNP leading the field with almost 33 inches, 161 percent of normal.
The Grand Targhee site(on the west Slopes of the Tetons at 9260 feet is measuring the greatest current snow water content of almost 28 inches, 127 percent of normal
Examining a few of the graphs of SNOTELS of most interest to Star Valley and the Salt and Grey River drainage  shows that given normal amounts of snow the remainder of the winter, they indicate a very favorable runoff this Spring.