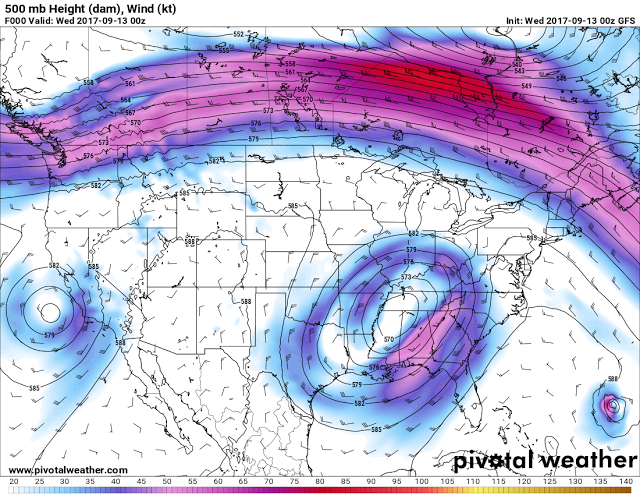 The next 7 days will see an end of Summer weather across Star Valley as a major change takes place in the large scale weather pattern.  The following three 500 mb charts show this dramatic change in the wind pattern over the western states.

Initially the jet stream is mainly across southern Canada with a low off California and the remnants of Irma over the Tennessee Valley.  Note the position of Hurricane Jose in the Atlantic.
By late Sunday the Jet stream has moved into the western  states as the low off the California coast moves into the western states as an upper trough. Note that Hurricane Jose is moving closer to the Atlantic coast. The low over the southern Gulf of California is the model forecasting a tropical  system developing northward from the tropics.  As of this time this storm has yet to develop.
By next Tuesday, a deep trough  of low pressure is located over the Western States assuring the end of summer weather, and providing even an early taste of winter in the high elevations.  Also note that the center of Hurricane Jose has moved to a position just off the mid Atlantic coast in the model world.  The confidence of where Jose will be in 7 days is very low, but this forecast suggest that it’s movement will have to be followed.
There is more confidence that within the next week some important precipitation will occur across the western states.  The following chart shows that model accumulation of precipitation for the next 7 days.

Additionally the air mass with the trough will be cold enough for snow in the higher elevations.  While confidence  is low as to how much and where any snow may occur the model does provide a forecast of total snow accumulation for the period ending next Tuesday.