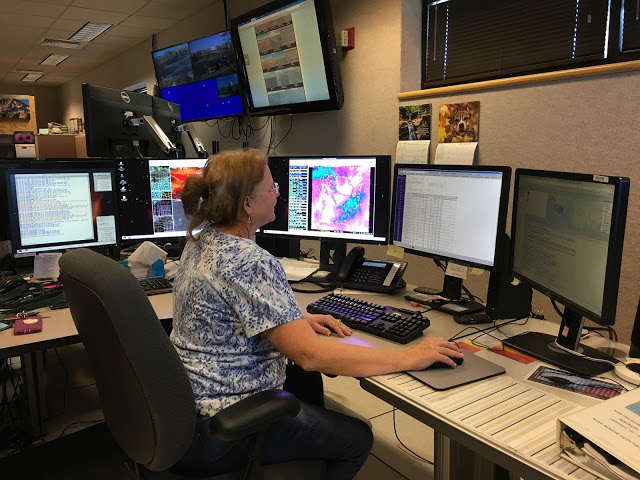 In 1986 the NWS announced a modernization and restructuring program designed to revamp the organizational and staffing structure of the agency. In April of that year Riverton was selected as the site for a proposed NEXRAD (Next Generation Radar) Doppler radar and forecast office.
Construction of the office facility was completed in March 1995. The installation of the radar soon followed in June and July.  WFO operations began in Riverton on August 28, 1995 with a staff of 18. The radar was formally accepted on April 10, 1996.
Beginning in 1996 the Riverton WFO took warning responsibility for eleven counties in western and central Wyoming comprising over 56,000 square miles. These counties remain the same today and include Big Horn, Fremont, Hot Springs, Johnson, Lincoln, Natrona, Park, Sublette, Sweetwater, Teton, and Washakie.  The arrival of the Advanced Weather Interactive Processing System (AWIPS) in April 1999 dramatically altered the computer capabilities of the WFO.  AWIPS remains the main computer interface for WFO meteorologists, but upgrades to the operating system and accompanying software occur frequently to keep up with changing technologies. The arrival of the AWIPS also ushered in five new lead forecasters to serve at the WFO. This brought the level of staffing to 23, where it remains today.
The era of typed forecasts came to an end in October, 2002 with the first issuance of a digital database of weather information. Today, the Graphical Forecast Editor (GFE) is used to create a suite of digital weather elements which in turn generate various types of forecasts for users across western and central Wyoming, most commonly the seven-day public forecast and fire weather forecast.
Today, the 23 professionals at the Riverton WFO remain dedicated to providing the best possible weather forecasts, warnings, hydrologic, and climate information available to the citizens of western and central Wyoming. In addition to the day-to-day weather forecasting, the employees maintain and repair weather observing systems across the service area, create and install new computer software, conduct scientific research, and routinely interface with customers and the public. All are encouraged  to stop by and visit the forecast office on U.S. Highway 26 about five miles west of Riverton.