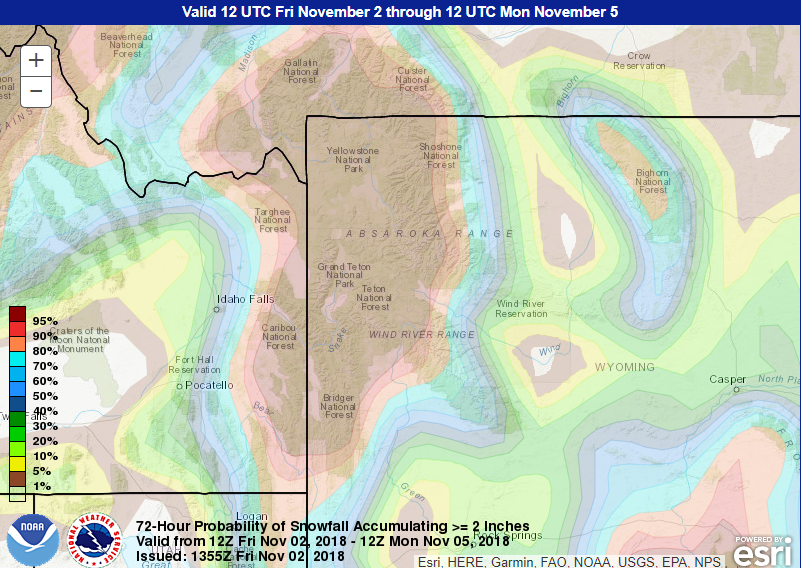 The weather pattern will transition to an active jet stream across the northern and central Rockies over the weekend. A cool, moist airmass will be spreading clouds and precipitation across Western Wyoming and surrounding areas with the primary threat of significant snows in western Wyoming developing by Sunday as a strong polar jet crosses the area.

Following is a series of charts depicting the progression of the strong polar jet from off the west coast to across Wyoming.

This pattern is very favorable for substantial precipitation across the mountains of the northern and central Rockies primarily in the form of snow except for the lower valley locations where a rain/snow mixture could occur.

How much snow will occur is a difficult forecast problem.  The computer model provides a solution for the total amount that would  occur over the weekend through Monday morning.

The greatest amount up to 2 feet are forecast for the Tetons and higher elevations of Yellowstone National Park.

One technique to show likelihood of  snowfall totals reaching certain depths is the probability of occurrence.

Following are probability charts of certain total amounts to occur over the weekend through Monday morning.  This forecast is generated by the forecasters of the Weather Prediction Center of the National Weather Service incorporating the model forecasts coupled with the experts diagnosis by the meteorologists.

Based on these forecast products, snow is very likely across much of western Wyoming and higher elevations of Southeastern Idaho by Monday Morning.

While precipitation is possible through the weekend, Sunday and Sunday evening appear to be the most active period as the strong polar jet crosses the region.

Star Valley will certainly experience  some snow,  however temperatures will likely remain near freezing with a rain rain/snow mixture occurring at times.