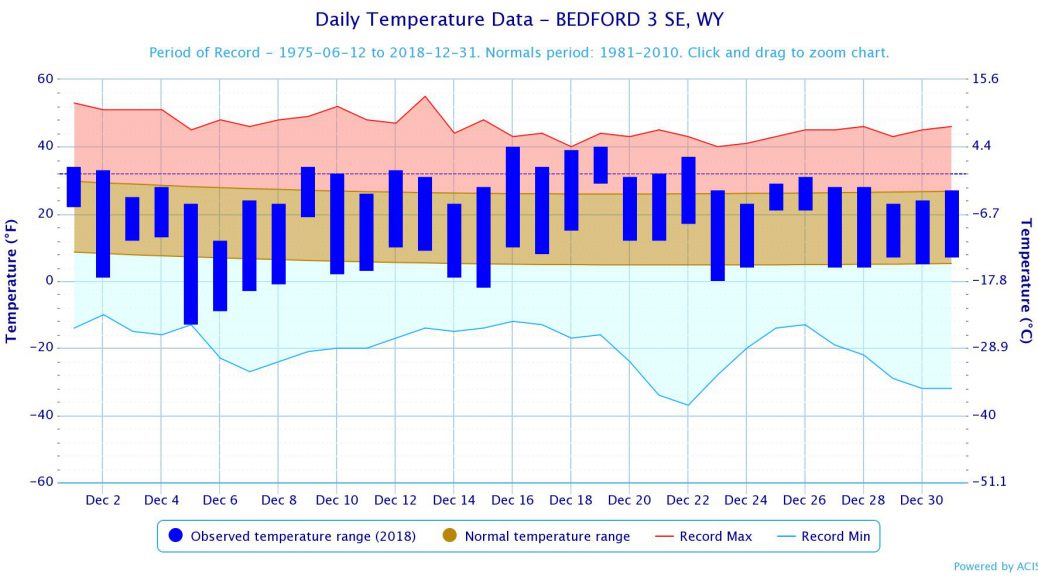 Star Valley in December 2018 was somewhat cooler and more snowy than normal. Following  are the weather graphs for the Afton climatological  station for December 2018

The December graphs for the climatological station 3 SE Bedford follows:

Very cold air covered Star Valley around the 5th of the month with the 13 below at the Bedford 3SE station setting a record for the date. It was even colder at the Double  L station where it dipped to -22.  Other low temperatures on the 5th were Thayne Elementary and Afton -13,  Etna Elementary -12, with Star Valley Ranch only a relatively mild -3.

The remainder of December was milder with several stations reaching to near or slightly above 40 around the 18th.

The Star Valley Ranch observation site had the greatest precipitation and snowfall with 1.99 inches and 37 inches respectively.  The Bedford 3SE site was close  behind with 1.76 and 34 inches of snow. Afton was the driest with 1.31  and 19 inches of snow.

Star Valley Ranch reported at least a trace of snow on all but 6 days of the month of December.

An interesting comparison is how much snow was on the ground in recent years on the last day of  December.  Following are the snow depths at Star Valley Ranch on December 31st

Wyoming in general in the month of December 2018 was a little drier than normal: