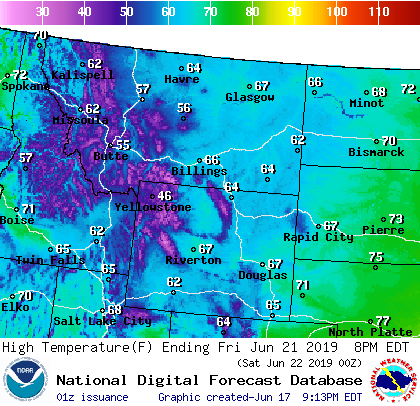 At 9:54 am MST Friday June 21st summer officially arrives in Star Valley as well as the remainder of the Northern Hemisphere.  However it will be more like an April Fools joke in Star Valley and surrounding areas as temperatures Friday afternoon will be some 15-20 degrees below the normal.  There will also be the potential for some local near freezing temperatures by Saturday morning in some of the colder valley locations of Western Wyoming.

The culprit is the forecast development of an unseasonably cool upper trough over the western U.S.

The map of the forecast surface high temperatures for Friday afternoon  provide a glimpse as to how cool this part of the Western U.S. will be.

The following chart shows the departure from normal the Friday afternoon temperatures will be:

Along with somewhat wetter than normal conditions