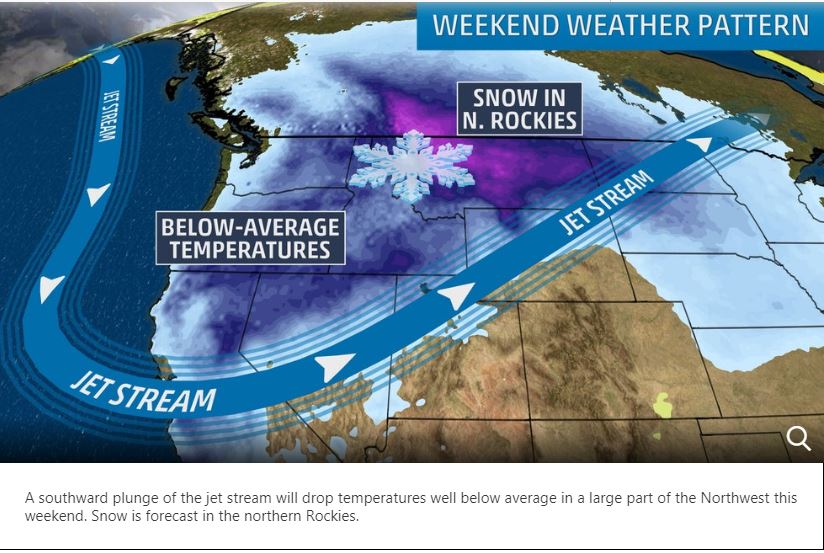 Nice heads up from the Weather Machine

Colder temperatures will crash into the interior Northwest and northern Rockies by this weekend, setting the stage for some valley locations to see their first snowflakes of the season.

A strong southward plunge of the jet stream will drop from western Canada into the Northwest later in the week. That will cause temperatures to fall much below average and also allow rain and snow to develop.

High temperatures are likely to be 10 to 30 degrees below late-September averages this weekend from Northern California and northern Nevada to Montana and Idaho. This will be the coldest air of the early fall season so far, and temperatures will likely drop below freezing at night in parts of the northern Rockies.

The cold temperatures will also allow snow to not only fall in the mountains, but also down to valley floors this weekend.

Some cities could see their first snowflakes of the season in western Montana, including Great Falls and Helena. That’s not too unusual since since the average date of the first snowfall is Oct. 2 in Great Falls and Oct. 12 in Helena.

The higher elevations of the northern Rockies have already seen snow earlier in September. But this round of snow has the potential to be heavier and more widespread and could impact travel through passes in the region. Since this weather pattern is still several days away from developing, it’s too early to determine specific details such as snowfall amounts.