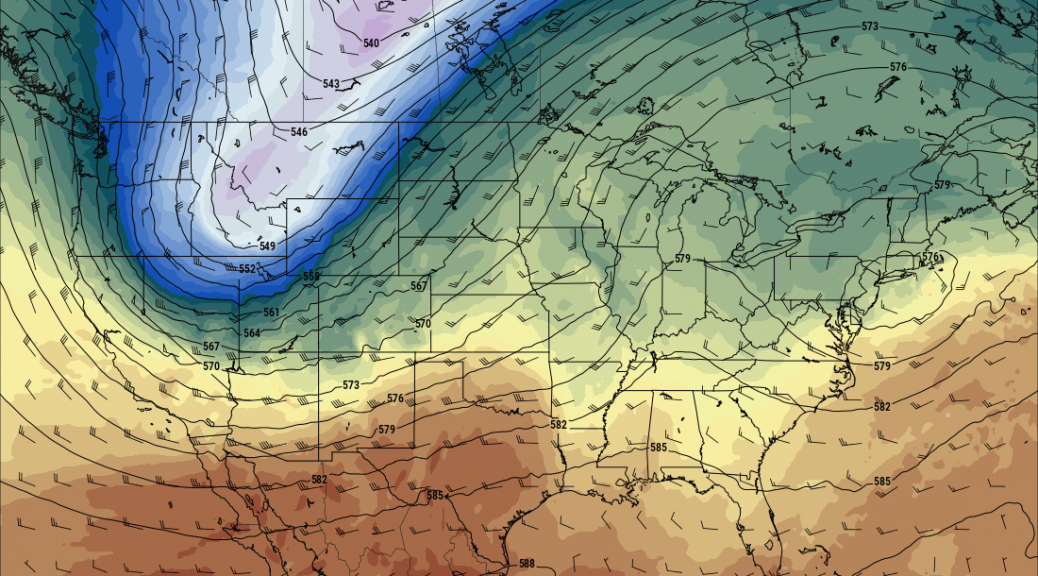 Next week will begin with ideal Fall weather, Monday and Tuesday, followed be an abrupt turn to much colder, early winter type weather on Wednesday and Thursday.  A very strong upper trough will move across the Rockies Wednesday accompanied by strong winds, some snow and cold.

After a mild afternoon on Tuesday, temperatures by Wednesday afternoon will be from 20-30 degrees  colder across western Wyoming and southeast Idaho.

Thursday morning will experience the coldest temperatures of the Fall so far, with near zero possible in some of the coldest valleys of northwest Wyoming and single digits to teens elsewhere.

At this time significant snows are likely in the higher elevations , however some snow is possible in the lower elevations as the cold front crosses the area Wednesday.

Following is a summary of expected changes this coming week across the United States.

Coldest Air of Fall So Far Will Sweep into the South, Plains and Midwest in the Week Ahead; More First Snows Possible

The most expansive fall-like air of the season so far will sweep into much of the United States in the week ahead, bringing relief from record heat in the South but also ushering in much colder air. Some parts of the Plains and Midwest could see their first snow of the season.

Looking at recent temperature maps in parts of the country, you might be excused if you think it’s August instead of October. Dozens of cities have tied or set all-time October heat records.

But there are big changes ahead.

A pair of cold fronts in the week ahead will usher in the most widespread dose of fall-like air.

The first front will sweep across the South and East early in the week ahead.

The second front will be stronger, bringing much colder air from the Rockies and Great Basin to the Plains, Midwest and parts of the South later in the week into next weekend. This system could even wring out the first snow of the season for some areas. 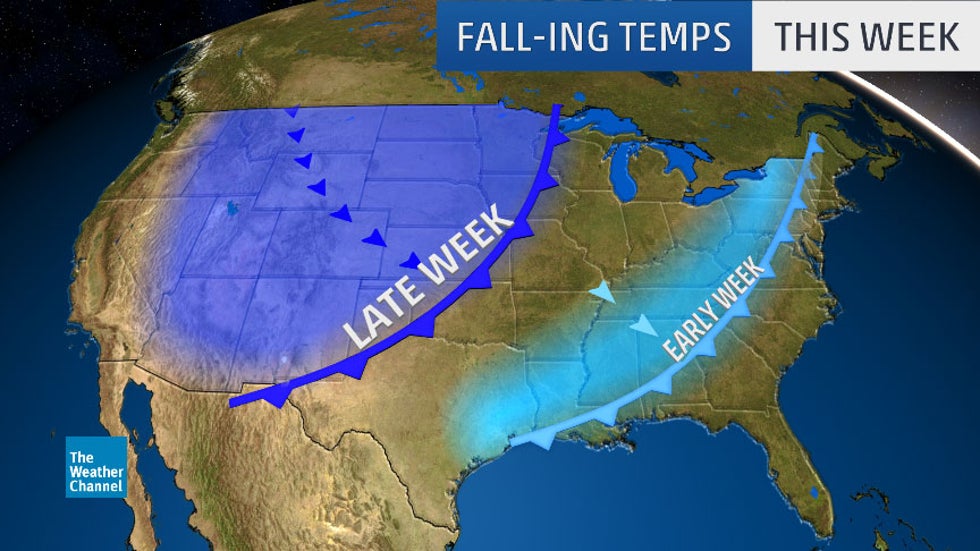 A pair of cold fronts in the week ahead will usher in much colder air to a large part of the U.S. through next weekend.

Let’s break down each front.

If you’re ready to crack open the windows and give your air conditioner a break, we have good news.

By Monday, you’ll be hard-pressed to find any 90s on the forecast map in the Deep South.

On Tuesday, areas from the Carolinas to Oklahoma and North Texas should see highs in the 70s, while the Deep South enjoys some 80s.

These are still generally near or even slightly above early October average highs. 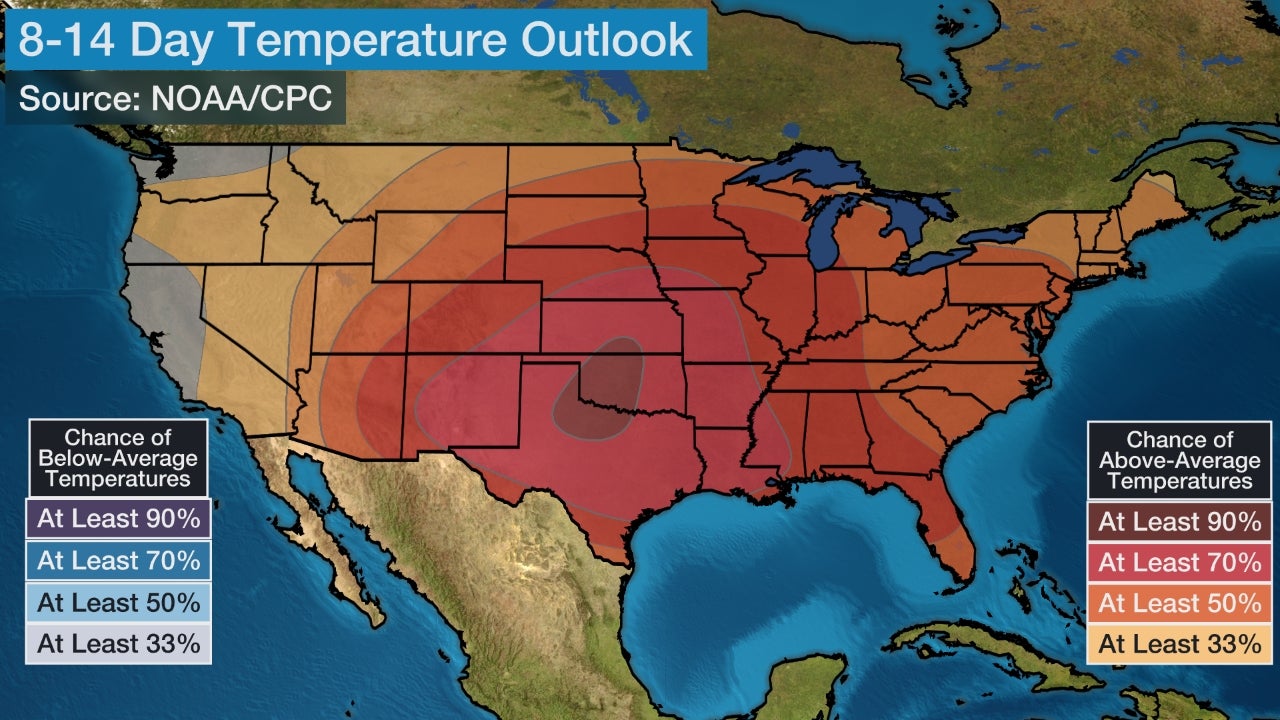 Lows in the 50s will become more widespread from central Texas to the Deep South to the Carolinas. Some 40s are possible from the Texas Panhandle across Oklahoma and Arkansas.

Parts of the northern Gulf Coast may finally see morning lows dip into the 60s.

This first front will also deliver some much needed rain for the flash drought in the South.

A second front in the week ahead will be much stronger, delivering the coldest air of the season to many areas of the nation’s heartland east of the Rockies late in the week.

The front will dive out of western Canada into the Northwest and northern Rockies on Tuesday, plunge into the central Rockies, Great Basin and High Plains on Wednesday, then sweep through the Plains, Mississippi Valley and Great Lakes Thursday and Friday.

Highs will plunge from 10 to as much as 35 degrees below average for the first full week of October. By late in the week, high temperatures may be stuck in the 30s over a large part of the northern Plains. Parts of the Texas Panhandle and Oklahoma may not see daytime highs rise out of the 50s.

Morning lows in the teens and 20s will be the rule in the Rockies and High Plains late in the week, including the Denver metro area. Some daily record lows may be in jeopardy.

Next weekend, lows in the 30s are possible as far south as the Texas Panhandle, Oklahoma and the Ozarks, with widespread first frosts and freezes in the Plains and upper Mississippi Valley. Some lows in the 40s may seep into the Tennessee Valley and Carolinas just over a week after the October record heat. 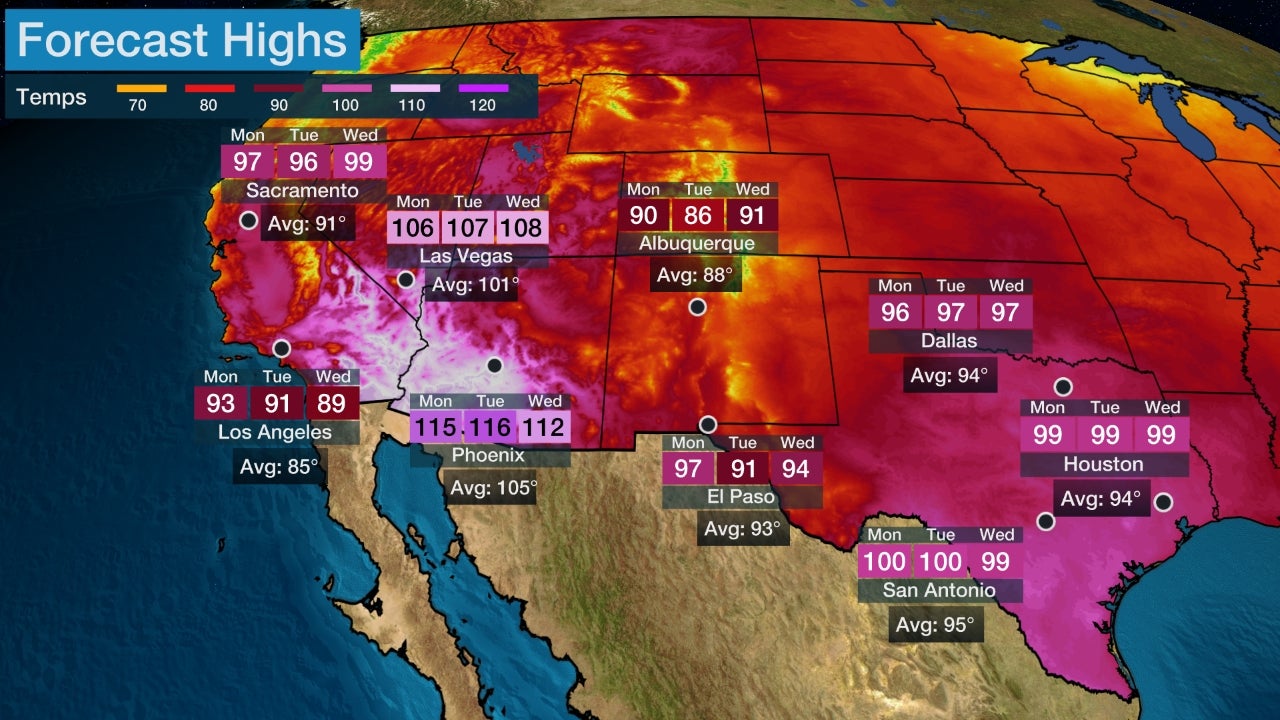 Yes, this late week cold front could be cold enough to generate snow. And it wouldn’t simply occur in the higher elevations of the Rockies or adjacent Front Range, as was the case with the record-smashing September snowstorm about a week ago.

On Tuesday, snow is expected in the northern Rockies. Wednesday into Thursday, any rain over the northern Plains and High Plains could turn to wet snow. Some wet snow could linger into Friday or even next Saturday near the Canadian border in parts of North Dakota, Minnesota, northern Wisconsin and the Upper Peninsula of Michigan.

This could be the first accumulating snow of the season for some in the High Plains, northern Plains and upper Midwest. Typically, the season’s first snow accumulates mainly on grassy areas, vehicle tops and roofs due to warm ground, but in some areas, slush may accumulate on roads, particularly at night.

(MORE: Here’s How Early in Fall It Has Snowed in Your City)

Even in parts of the Plains and Midwest that don’t see snow out of this, it could be quite windy and raw late in the week, as low pressure may intensify near Lake Superior.

This second front will be quite a shock to the system given the recent warm weather. Then again, we’re moving deeper into October. We must have some autumn reality check, right?