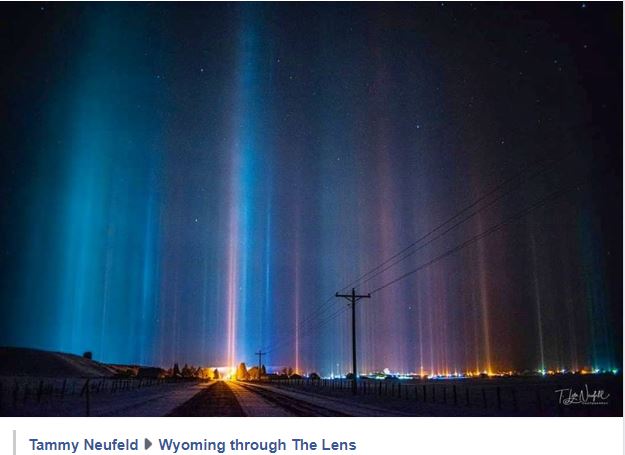 Saturday night and early Sunday morning an unusual natural phenomena was observed in parts of Star Valley.  The combination of very cold temperatures near zero, the development of fog after dark produced what is known as light pillars.  Tammy Neufeld posted a spectacular view of the vertical lines of light  observed over the town of Thayne.

In addition the time lapse video from just south of Bedford captured the scenario of the fog and light pillars developing Saturday night.

Following is the description of light pillars. In this case the obvious light source was terrestrial from primarily the few street lights around Bedford.

A light pillar is an atmospheric optical phenomenon in which a vertical beam of light appears to extend above and/or below a light source. The effect is created by the reflection of light from tiny ice crystals that are suspended in the atmosphere or that comprise high-altitude clouds (e.g. cirrostratus or cirrus clouds). If the light comes from the Sun (usually when it is near or even below the horizon), the phenomenon is called a sun pillar or solar pillar. Light pillars can also be caused by the Moon or terrestrial sources, such as streetlights.

Here are good examples from a couple other locations of the same phenomena.