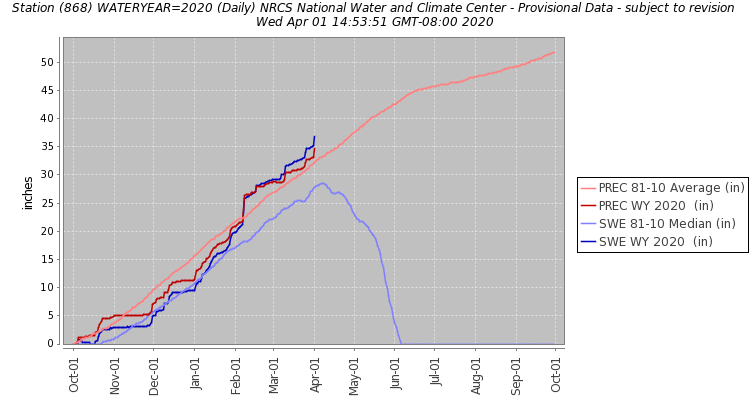 While March typically sees the beginning of Spring, this March saw little real evidence of that, as temperatures were just as cool the last part of the month as the first.  The Afton monthly temperature graph best illustrates this:

It was also quite cloudy most days with precipitation observed on about half the days of the month;

Above normal precipitation(snowfall) was common from Star Valley north to YNP, while east of the mountains it was mostly drier than normal

Good news that the mountains snow pack  continued to increase through the month to well above normal noted on the two local SNOTEL sites:

The coldest observed temperature reported in Star Valley was at Double L Ranch northwest of Etna where it dipped to -9F on the 2nd. This was generally the coldest morning of the month.  A notable exception was at the Woods station in Star Valley Ranch at 6800 feet where the 27th saw temperatures dip to the lowest point at 10F above zero.  This illustrates the range in temperatures that occur from along the river valley to the higher locations in the pines.  Other monthly minimums were -3F at Etna ES,  3 at Thayne ES and 0 at Afton, all on the 2nd.

While the month was cooler than normal, highest temperatures occurred around the 8th.  Bedford 3SE rose to 53F  for the highest observed valley temperature for the month.