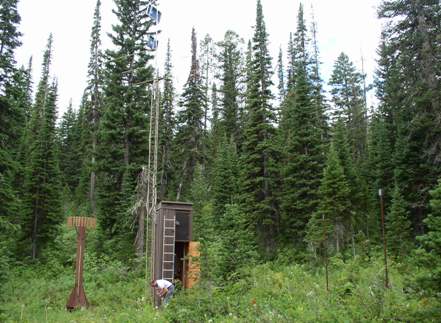 The new water year begins on October 1st.  Why October 1st? The simple answer has to do with the way the water cycle works. The setup for next year’s hydrologic “action”, (snowmelt runoff) takes place starting in the prior fall, not January.  And precipitation that occurs toward the end of the calendar year often doesn’t impact flow in streams and rivers until the following spring. The water year 2020/21 has just ended and it was a quite dry one in Star Valley and surrounding areas, particularly spring and early summer.

Examining the Willow Creek SNOTEL illustrates how dry this last water year has been.

Up until the last week in July, this year was headed for the driest on record, illustrating the echoing of the very low runoff from last winters below normal snowpack. Only the wet, last half of summer kept this from being the driest.

Overall with a few pockets of above normal, Wyoming experienced a below to much below normal water year. 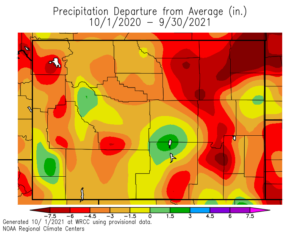 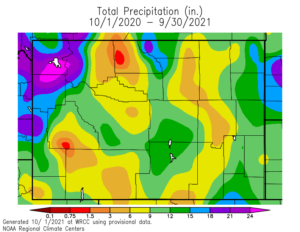 As expected  Northwestern Wyoming experienced the greatest precipitation  with 16-20 inches or more including parts of Star Valley.

Star Valley Ranch also was below normal with near 22 inches.

Of note was the limited precipitation during the Spring beginning the first part of March and then virtually no rain from the end of May until the last of July.  The monsoon moisture did make an appearance late July through August with several heavy showers.

Much of the western states experienced a dry year.  Exceptions were much of  Arizona and parts of the central and southern Rockies.  California continues to suffer from long term drought.