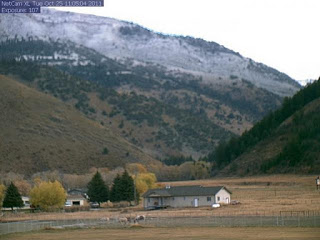 A cold  front moved across Star Valley early Tuesday as expected with little in the way of precipitation.  The only measurable was .01 at Star Valley Ranch early Tuesday morning.  However there was some snow in the Salt Range as both Willow Creek and Cottonwood Creek Snotel sites recorded about .10 in the form of snow which was visible on the Osmond ES Cam Tuesday morning above about 7500 feet.

Under clear skies and calm winds temperatures this morning dropped to the coldest of the fall.  The lowest reported in the valley was at both Etna ES and Thayne ES with 14 and Star Valley Ranch was the warmest at 19.

While the cold front was generally dry in far Western Wyoming, significant snow has fallen in the east.  As of this morning there has been as much as 9 inches reported in the Cheyenne area.

A generally fair weather pattern will set in across Star Valley the next several days. While nights will continue seasonably cold, daytime temperatures will slowly moderate.  By Friday afternoon will be back into the 50s and likely change little into the coming week.  Little in the way of precipitation is now expected at least through the weekend.