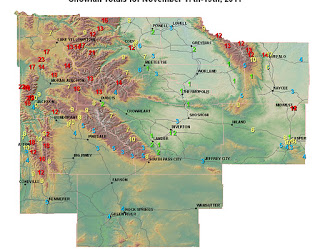 The latest storm has cleared Star Valley but a cold and unstable air mass remains. Mostly light  snow showers will continue until this evening.  New snow across the valley ranged from 6-8 inches with 8 inches at Star Valley Ranch. Here is a map of the Snowfall totals for the storm produced by Riverton WFO.

The greatest snowfall with this storm occurred over the mountains with  between one and two feet falling in the Tetons and about a foot over the Salt Range.

As we move toward Thanksgiving Day the storm track is forecast to shift to the south  of Star Valley with the next system now approaching the California coast .

This system is weaker than the previous system that just moved across the area.  Much of the precipitation will pass well south of Star Valley as this trough of low pressure moves east into the Central Plains by Tuesday.

While another trough of low pressure will be moving onshore along the west coast by Thanksgiving day, the primary area of precipitation should again remain south and west of the valley.  Southwesterly flow across southeast Idaho/western Wyoming is likely to be rather mild but result in quite a bit of cloud cover along with chance of either rain or snow showers.

It now appears that any precipitation will have minimal impact on Thanksgiving travel in Southeast Idaho/Western Wyoming.

The graphic below is the forecast  of total precipitation for the 4-day period Monday to Thursday this coming week. It should be a wet period for much of the west coast, but only scattered light amounts over the interior west.