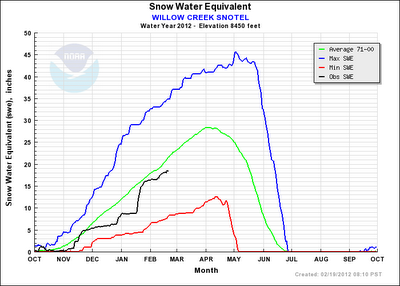 The weekend storm has moved on with generally 2 inches of new snow in most Star Valley locations. The observer south of Smoot only had an inch with Star Valley Ranch somewhat an outlier with 6 inches observed by early  Sunday afternoon.  The snow pack still remains a little below normal, and certainly far behind last year in the adjacent mountains. 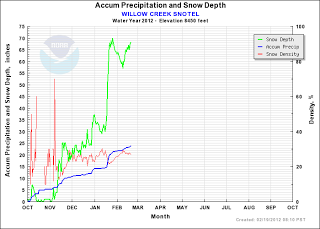 The Willow Creek Snotel has shown a strong recovery from the very slow start on the Winter snow pack.

Now looking ahead a major shift is underway with the storm track and more importantly the core of the wintertime polar jet taking direct aim at Star Valley this coming week.

Beginning this Sunday evening the weekend trough is moving on east as the strong polar jet is crossing the high pressure ridge in the Gulf of Alaska.

By mid week the 130kt polar jet will be driving eastward just to the north of Star Valley.

And by the end of the week while a deep trough develops over the central states, models are indicating strong low pressure troughing will be approaching the region.

Although a 7-day model forecast is always of questionable accuracy, the idea of a major upper system crossing the western states appears to be a concern for next weekend

Confidence is high that it will be a very snowy week, beginning  Tuesday.  The model forecast total precipitation for the next 7 days indicate a large area of greater than an inch of water content over much of the western Wyoming mountains including the Star Valley.

Given the likely extended duration with the very strong, westerly upslope flow, new snow fall totals of 2-4 feet are certainly possible over the Tetons, Salt and Wyoming Ranges.

How much will accumulate on the floor of Star Valley is more of a question as the air mass moving into the area by Wednesday will warm considerably leading to very wet snow,  possibly changing to rain for a time.  However amounts of a foot or more certainly are a good possibility at least at higher valley locations, such as the south end and places such as Star Valley Ranch where elevations are near 6500 feet.

By Thursday colder air will move back across the area turning all the precipitation back to snow.

By next Sunday there is a good possibility that the mountain snow pack will be increased to above average levels, which would be quite the recovery from where they were in early January.