Star Valley Ranch observed 25 consecutive days of a least some snow.  Sunday, March 4 is the first day in almost 4 weeks that snow flakes did not fall out of the skies of Star Valley.  Substantial recovery has occurred in the mountain snow pack since the first of the year. Surveying the SNOTEL sites in the nearby mountain, as of March 4th, all of them are now measuring normal or slightly above normal snow packs.

Temperatures Sunday afternoon were the warmest so far in 2012, with most valley locations in the mid to upper 40s.

By midnight Tuesday this system is forecast to strongly develop southeastward leading to a rather deep upper low over the desert southwest.

While the strongest portion of this system will track west and then south of Star Valley across Nevada and Utah, some snow will return to the area by Tuesday.  Amounts are not expected to be more than a couple inches in the valley.

High pressure and much warmer air will then spread across the western States later in the week leading to the first real signs of Spring as temperatures could warm to near 50 by weeks end.

The surveys are still underway in the wake of the devastating Tornado Outbreak in the central portion of the Nation on Friday.  As of Tuesday morning there have been 144 Tornadoes logged with over 900 total reports of severe weather. 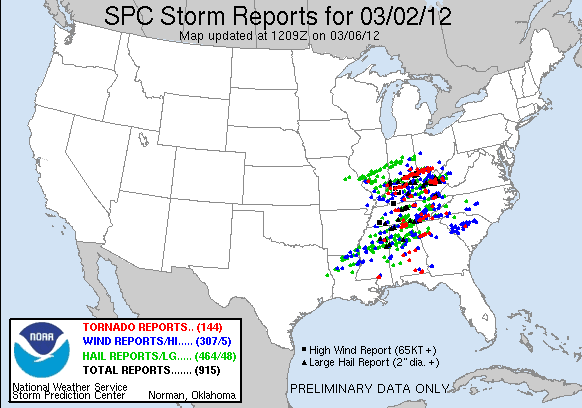 The fatality total is close to 40 making it one of the deadliest early March Outbreaks on record.