The large upper trough which passed across Star Valley on Friday has moved well to the east as of Saturday evening.

﻿﻿﻿﻿﻿﻿﻿﻿﻿ The deep upper low off the west coast pumps up the upper ridge moving into the Western States and brings with  it three days of exemplary weather to much of the Cowboy state and surrounding environs.  Afternoon temperatures under a strong Springtime sun should reach well into the 60s through the first part of the coming work week.

This time of year there is always a question as to when the runoff from the mountain snow melt will commence.  Looking at the conditions in the Salt River Range, particularly at the Willow Creek SNOTEL site as of Saturday evening suggests that the snow pack melting is about on a normal schedule: 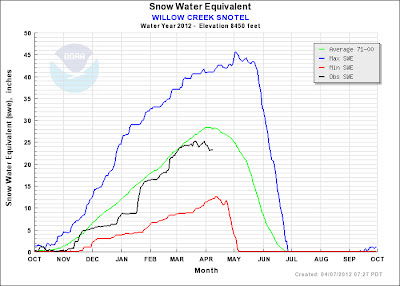 While slightly below normal the SWE(snow water equivalent) has only dropped less than 10 percent from the peak at the end of March, even though there has been several warm days. 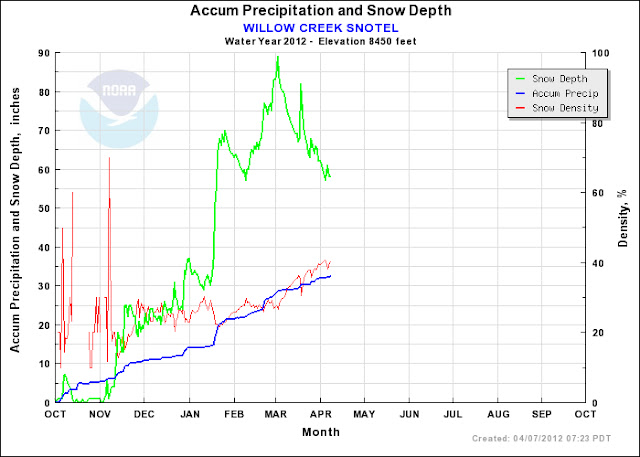 While the actual snow depth has diminished close to 30 percent since early March, the snow density has steadily increased(compacted).

Examining the river gauge on the Salt near Etna for the past week show a gradual decrease from a high point on  4/1.  The projected stages of little change for the coming week

seem reasonable as the trough off the west coast moves into the interior west by weeks end.

The amount of duration of the precipitation that will accompany the trough after Wednesday is uncertain at this time as much of the energy appears to remain to the south of Star Valley.  However it will be substantially colder  with snow levels once again to the valley floor.

The longer range forecast from the Climate Prediction Center from Friday until the first of the following week suggest a wet, relatively mild period.

This is a forecast period that needs to be look at with suspicion as models, particularly in the Spring, when systems begin to slow down, diminish in skill